The big cat population is around 12 tigers in a 100 sq km forest area, a tad higher than the national average.

THIRUVANANTHAPURAM: The long-pending demand for a rehabilitation centre for big cats in the state is likely to bear fruit in the next fiscal as the forest department has submitted a proposal to the government to set up a tiger rehab centre-cum-safari park.

In the wake of the growing number of incidents involving tigers straying into human settlements -- especially in Wayanad Wildlife Sanctuary which has the highest number of tigers, with an estimated population of 75 to 80 -- there was a clamour for setting up a rehab centre for the big cat.

PK Kesavan, Principal Chief Conservator of Forests(CCF), told TNIE that the department has captured four tigers from Wayanad in the past two years after the big cats strayed into human settlements. Of these, one had died. Keeping the tigers in the custody of forest department is a challenge as zoo authorities are bound by restrictions on keeping the captured felines in their custody. One of the tigers captured was an old one and the department was unable to release it back into the wild. 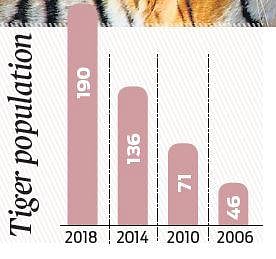 According to Surendrakumar, Chief Wildlife Warden, the department is planning to start a rehab centre at the Puthoor Zoological Park in Thrissur, work on which is underway.

And the park can also accommodate leopards captured by the department from the forest fringes. Most of the felines which stray into human settlements are aged ones and they will not able to hunt for prey in the wild in case the department lets out them into the forest, he said.

Hence, the department also has plans to start a tiger safari centre at the rehab centre which will give tourists a ringside view of these dangerous beasts. But the immediate priority is to establish the tiger rehab centre, with the safari park scheduled to be taken up in the next phase.

A similar rehab centre in Wayanad -- home to the largest tiger population in the state, besides being the epicentre of man-animal conflict in Kerala --  is also part of the department’s plan. Once the finance department gives the nod, the forest department will draw up a detailed project report for the same.

The big cat population is around 12 tigers in a 100 sq km forest area, a tad higher than the national average.

Now we are on Telegram too. Follow us for updates
TAGS
Tiger Population in India Wayanad Wildlife Sanctuary PK Kesavan