CBSE affiliation issue: Board gears up for tough action

THIRUVANANTHAPURAM:  The recent incident in which 29 students of a school in Kochi were unable to write their CBSE examinations, due to the institution failing to obtain affiliation, has brought to fore the rampant malpractice carried out by unaided schools in collusion with schools affiliated to the national board. If Arooja’s Little Stars School, Kochi, was not affiliated to the CBSE, then how did it manage to maintain a steady flow of students in its rolls year after year? Also, why did the school have to wait till the eve of the examination to realise that the students won’t be able to give it? These questions point to a deep-rooted conspiracy.

A few affiliated schools have been in the dock earlier for fudging their rolls to include students of unrecognised schools, so as to facilitate them to write board exams. The malpractice is reportedly carried out for a fee ranging between Rs 20,000 to Rs 25,000 per student, said sources.

How did the malpractice end?
It has come to light that students of Arooja Little Stars had appeared for board exams by posing as students of another school in Ernakulam for the past six years. The affiliated school, which facilitated the malpractice, was caught red-handed in June 2018 by Tarun Kumar, then CBSE regional officer for Kerala and Lakshadweep. The school was found to have enrolled 99 students from unaided schools and students of Arooja were reportedly among them. TNIE had extensively reported about the former regional officer’s crackdown on erring schools. However, he was shunted out from the state after school managements launched a tirade against him.

‘School was aware’
Students of Arooja, who missed the examination this year, had to be registered with the CBSE during 2018-19 (while in Class IX), which they didn’t. After being caught for malpractice, the affiliated school in Ernakulam developed cold feet and refused to fudge its rolls. Hence, the students were unable to appear for their boards this year.  “The school was very well aware that its students were not registered with CBSE and wouldn’t be able to write the exams. There are also reports that the school tried to persuade CBSE to consider the students’ plight as a special case, but in vain,” said a source. 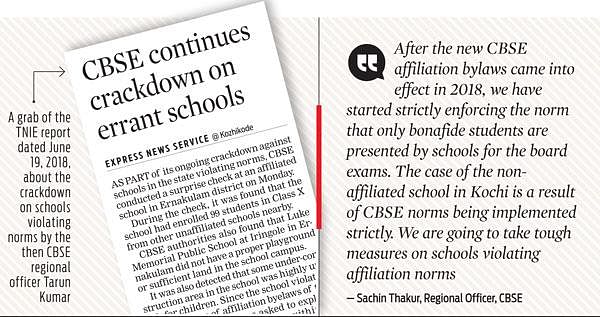 Parents advised caution
Many schools continue to dupe parents by misleading or lying to them about the affiliation status with CBSE. “Most parents do not even know the difference between an affiliated and to-be affiliated institution. Things go smooth till Class IX until CBSE insists on registration. It is at this juncture that some schools resort to such malpractice,” said an officer with CBSE. Parents should ask the CBSE affiliation number of the institution and crosscheck it with the board’s website. In case of to-be affiliated schools, they should also ensure that the institution secures affiliation at least when the student reaches Class IX, said the officer.

More from Kerala.
Now we are on Telegram too. Follow us for updates
TAGS
CBSE exams Aroojas Little Stars Kochi