Airlines keep fingers crossed as tensions escalate between US, Iran

The industry believes that this could not only result in a spike in airfares especially for passengers bound for Europe and US and but also burn a hole in the airlines’ coffers.

THIRUVANANTHAPURAM: The escalating tensions in West Asia in the wake of US – Iran strife have the airlines industry worried as it anticipates closure of the Iranian air space or the air carriers avoiding the route over Iran altogether.

The industry believes that this could not only result in a spike in airfares especially for passengers bound for Europe and US and but also burn a hole in the airlines’ coffers.

Currently, on an average around thousand passengers embark daily from Kerala airports to various destinations in Europe and US.

Though so far, the conflict has not affected these travellers, it is bound to change if the conflict escalates.

The airlines would be forced to review their services especially to and via West Asian countries.

Last time when US- Iran relations had soured in June following Iranian downing of an American drone near the Strait of Hormuz, the Directorate General of Civil Aviation (DGCA) had directed the Indian carriers to avoid Iranian airspace for safety reasons.

A senior Air India Express official told TNIE, that current tensions had started to affect just crude oil prices and the corresponding increase in the cost of aviation turbine fuel (ATF) would naturally be passed on to passengers.

“However, once the tension spreads to neighbouring regions, things will go out of control as airlines would be forced to cancel services or take de-tour via other cities which will not only further increase passenger fare, but also lead to financial loss for the airlines,” he said.

Babu Paul, head of Speedwing Tours, a Kochi-based ticketing agency, says “We are monitoring the situation.

"At present there is no major fare hike to Europe or US cities from India or Kerala. But if the tense situation persists for a longer period, the airfares would go up and ultimately the passengers would be at the receiving end. As the tension escalates, some of the passengers to Europe or US cities have rescheduled their travel and this has helped keep the fares under check for the time being,” he said.

Last year, post the Balakot strike, Air India and other carriers from India had to re-route, merge or suspend many of their international flights that connected India with European and American cities after Pakistan closed its air space.

According to Union Ministry of Civil Aviation, the closure of Pakistan air space on February 28, 2019, following the Pulwama suicide bombing had affected around 600 flights that operate per day across
India-Pakistan airspace boundary and these flights were re-routed through Arabian sea airspace.
The airspace restriction put in place by Pakistan was lifted only on July 16, 2019. 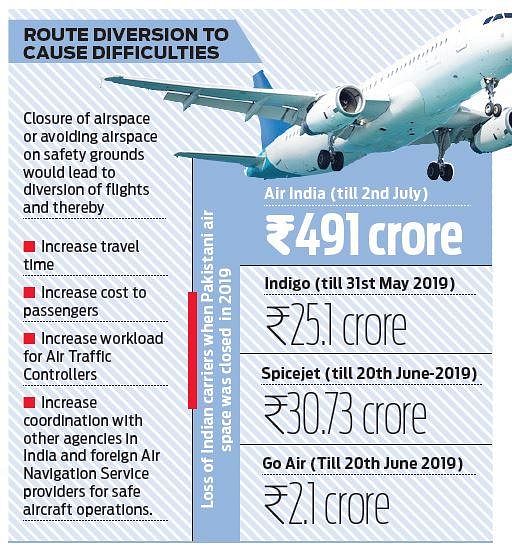 Now we are on Telegram too. Follow us for updates
TAGS
US Iran relations US Iran tensions Baghdad airstrike Iran general killing