The Poringalkuthu dam site belongs to the forest department and the land has been leased out to the KSEB.

KOCHI: Amidst allegations that many of the projects showcased at Ascend 2020 Global Investors Meet are like old wine in new bottles, a proposal to develop Poringalkuthu into a tourism destination has triggered a controversy. The dam houses KSEB’s hydel power project site, deep inside the Vazhachal forest. 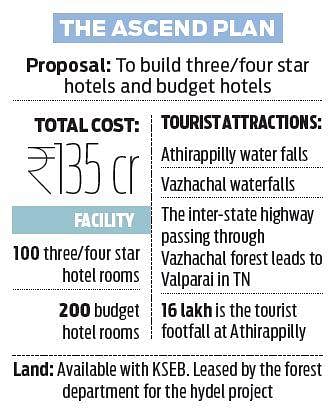 The Poringalkuthu dam site belongs to the forest department and the land has been leased out to the KSEB. The power project was commissioned in 1958 and the KSEB had to secure clearance from the Ministry of Environment and Forest (MoEF) in 2011 to implement an extension scheme of the project.
“The land has been leased to the KSEB for power generation and the board has no right to use the land for other purposes. If the lease agreement is violated the forest department has the right to cancel the agreement and retrieve the land,” said former conservator of forest M S Jayaraman.

“A tourism project in a forest area will pose a threat to the ecological sustainability and diversity of the region. Increased human activity will disturb the wildlife and may lead to extinction of endemic species,” he said. The project proposal unveiled at Ascend 2020 proposes to construct 3 or 4-star hotels with 100-room facility and budget hotels with 200-room facility. The estimated cost of the project is Rs 135 crore.

“The proposal is for exploring the possibility of setting up accommodation facility for tourists, utilising the land available with the KSEB. Availability of decent accommodation facilities does not meet the demand in the area consequent to the increase in the number of visitors to nearby tourist spots,” the industries department said in its proposal. However, the proposal ignores the fact that Poringalkuthu is not a tourism spot and the main attraction of the area is Athirappilly waterfalls, which is located 10 km away from the dam.

According to environment activists, the Poringalkuthu dam is located inside a reserve forest area which harbours a rich diversity of flora and fauna. The dam is located close to an elephant corridor and Parambikulam Tiger Reserve is located on the other side of the reservoir. The low-elevation riparian forest of Vazhachal is the only location where all the four South Indian species of hornbills — the Great Indian Hornbill, Malabar Pied Hornbill, Malabar Grey Hornbill, and the Indian Grey Hornbill - are found. The area is home to many endemic species.

“How can the KSEB or state sub-lease a forest land? Forest land and its buffer zone come under Centre and it is impossible to launch a tourism project deep inside an evergreen forest. This is more a real estate deal than a development project, aimed at gifting forest land to private persons said biodiversity expert C M Joy.