Cyclonic storm ‘Nisarga’ brewing in the Arabian Sea, near Lakshadweep, is likely to bring widespread rain in the state on Monday and Tuesday.

THIRUVANANTHAPURAM: Cyclonic storm ‘Nisarga’ brewing in the Arabian Sea, near Lakshadweep, is likely to bring widespread rain in the state on Monday and Tuesday. A low pressure area has formed over the southeast and adjoining east-central Arabian Sea and Lakshadweep area. It is likely to intensify into a depression during the next 24 hours and may become a cyclonic storm, resulting in 84 per cent excess rainfall for the state in the first week of June. However, Nisarga will not hit the state and is likely to move towards Gujarat and north Maharashtra coast. 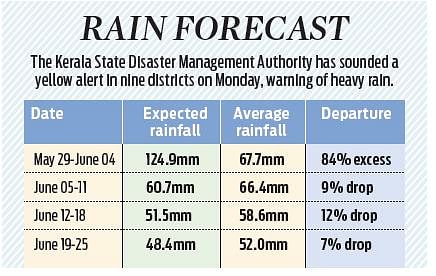 The Kerala State Disaster Management Authority (KSDMA) has suspended all fishing activities off the coast as strong wind with speed reaching 45-55 kmph and gusting at 65 kmph is likely to prevail along and off the Kerala coast and over Lakshadweep area. The intensity of rain will come down after the first week of June as per the extended range forecast issued by the India Meteorological Department for four weeks. The KSDMA has also sounded a yellow alert in nine districts on Monday, warning of heavy rain.