Yet another academic year is all set for a June 1 start and, like many times in the past, monsoon too is likely to set in on Monday.

THIRUVANANTHAPURAM: Yet another academic year is all set for a June 1 start and, like many times in the past, monsoon too is likely to set in on Monday. The sight of children walking in rain to schools on the first day would be missed this time around as they will be confined to their houses after the government decided to keep the schools shut in the wake of Covid-19 spread. But the students — 45 lakh studying in state- run schools alone — will not miss out on their learning as classes will begin through virtual platforms —television and online — from Monday.

CBSE schools and colleges will also begin online classes. The colleges have asked teachers staying in the same district to turn up in person. KITE-VICTERS Channel, which functions under the General Education Department, will telecast learning sessions for classes 1 to 12, except 11.

The sessions, named First Bell, will be from 8.30am to 5.30pm on week days. The duration of the sessions will vary from 30 minutes to two hours. The class teachers will be in touch with students on social media platforms or phone on a regular basis. VICTERS Channel is available on all cable and direct-to-home television networks. Classes will be also streamed online on YouTube and Samagra portel. 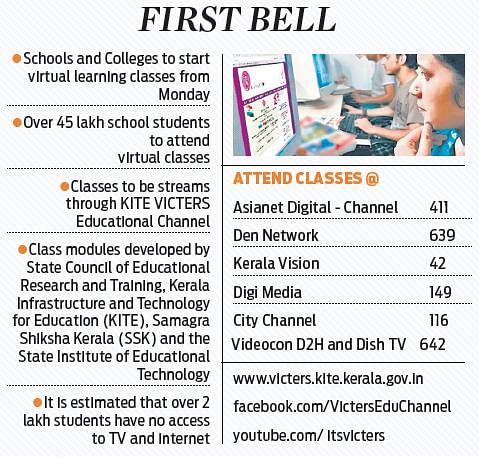 There will be retelecast of all classes and the sessions on channel and they will also be available on the KITE-VICTERS website and its social media platforms for downloading. “It is natural that people have doubts and concerns about the new method. We do hope that they will slowly adapt to the methodology,” said General Education Director K Jeevan Babu. The class modules are developed by the State Council of Educational Research and Training, Kerala Infrastructure and Technology for Education (KITE), Samagra Shiksha Kerala (SSK), and the State Institute of Educational Technology.

“The modules have been prepared to suit the online delivery of lessons,” said KITE CEO K Anwar Sadat. SSK will facilitate preparation and monitoring of worksheets for students in classes one to seven. The government has given assurance that arrangements would be made for students who have no access to television and internet to be included in the virtual learning exercise. A survey by General Education Department found that more than two lakh students do not have access to the facilities. The class teacher has a major role in identifying such students and head of the school will make alternative arrangements for screening of classes.