Unlock phase one: Most churches will reopen, some won’t in Kerala

While most churches will reopen, some have decided to continue with the status quo till June 30.

KOCHI: With the government allowing reopening of religious institutions from Tuesday, heads of various Christian denominations have released decrees and guidelines for conducting services in churches. Eager to reopen the churches after almost 75 days of closure, it appears that church authorities hope they can ensure an infection-free atmosphere. While most churches will reopen, some have decided to continue with the status quo till June 30.

Respective parishes and family units can decide on the number of people to be allowed and other norms to be followed. To prevent strangers from entering the church, a pre-booking system has been set up in many churches. “Only those parishioners with passes can enter the church and take part in the Holy Mass. All steps to ensure social distancing and restrict the number (of worshippers) to 100 will be taken by respective vicars of the churches,” said Fr Antony Thalachelloor, secretary of the Syro-Malabar Church Media Commission. 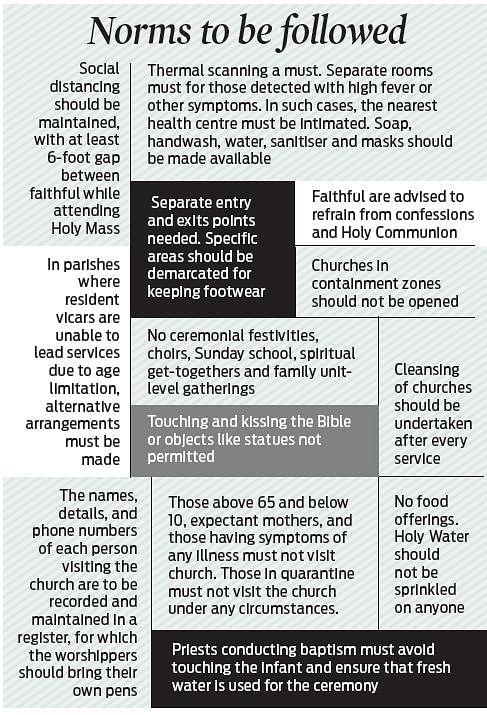 However, regarding the Holy Communion, Syro-Malabar Church officials said that they have received an informal clarification from the government that communion is not included in the restrictions as it is not part of the Mass. “As we have received a clarification on this, we will be giving Holy Communion to the faithful. Since there is no exception for the age rule, an alternative arrangements will be made. As a solution, assistant vicars would conduct mass in major churches. In smaller churches with a single elderly priest as vicar, younger priests from ashrams and other churches would be sent,” said a Syro-Malabar Church official.

Catholicos of the Jacobite Syrian Church Baselius Thomas I on Saturday issued a decree in which the faithful are advised to refrain from confession and Holy Communion. As per the decree, parishes can be opened by following certain guidelines. “Social distancing should be maintained, with at least six-foot gap between worshippers inside the church while participating in the Holy Mass. The facility to do thermal scanning must be set up in the churches,” said the decree.

In the case of the Latin Catholic Church, all dioceses are given permission to decide on reopening churches. Joseph Kalathiparambil, Metropolitan of Varapuzha Archdiocese, in a detailed press release said that all churches, except those in containment zones and St Antony’s Shrine, Kaloor, shall reopen by following strict guidelines issued by the state government. However, as per sources, a majority of the parishes are likely to maintain status quo till month-end. At the same time, the Malankara Orthodox Syrian Church will decide on reopening the churches only after its synod meeting on Tuesday.

More from Kerala.
Now we are on Telegram too. Follow us for updates
TAGS
Christian Churches