Nimisha and Sonia had converted to to Islam from Hindu and Christian faiths during their college days.

THIRUVANANTHAPURAM: Two Kerala women, who had fled the country to join Islamic State-led community in Afghanistan and were later rounded up by Afghan agencies after IS citadels got breached, have expressed interest to return to the state. 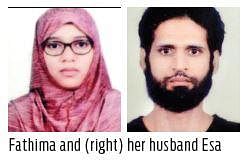 In a video released by StratNewsGlobal website, Fathima alias Nimisha, a native of Thiruvananthapuram, and Sonia Sebastian aka Ayesha of Ernakulam were seen telling they would like to return to Kerala and that their husbands were killed in Afghanistan.

Nimisha and Sonia had converted to Islam from Hindu and Christian faiths during their college days.

Nimisha later married Esa, a Muslim convert from Christianity, while Sonia tied knot with Abdul Rashid, who is considered as the ring leader of Kasargod IS module.

Sonia said she would like to return to her husband’s family and added that they were disappointed with the life in Afghanistan.

Nimisha was heard saying that she would love to visit her mother provided she is not arrested.

Now we are on Telegram too. Follow us for updates
TAGS
Islamic State