It cannot be implemented in their rented homes | Over 10,000 migrants in some stayhomes

THIRUVANANTHAPURAM: Social distancing is one of the best ways available to contain the spread of Covid-19 and Kerala has been doing well to make the physical distancing an order of the day. But for many of the migrant labour camps in the state, social distancing is still impractical for the reason that it cannot be implemented in their rented accommodations. For instance, Ambalamugal, the industrial suburb of Kochi, alone houses more than 10,000 migrants in a limited number of accommodation spaces.

There are a lot of such places across the state, including Perumbavoor in Ernakulam district, which have the highest concentration of migrant labourers. All these labourers working in the informal sectors were forced to stay indoors where keeping social distance is almost impossible. 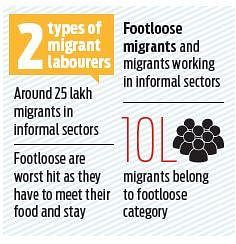 Benoy Peter, executive director, Centre for Migration and Inclusive Development, which works for the welfare of migrants, told Express that there are two categories of migrants in Kerala. One is footloose labourers and the other is the migrants who work in informal sectors. Migrants employed in informal sectors like harbours, industrial estates, and other sectors are relatively on the safe side as most of the employers provide food and accommodation to them. Although social distancing may not be possible in these rented spaces, they at least make sure that the migrant labourers get decent food and accommodation till the lockdown ends.

In the case of footloose migrants, things are not that rosy as they will have to first ensure their food and accommodation, leave alone social distancing.  Only 30-40 per cent migrants who work in the state, have left for their native states as majority of them have already experienced some sort of social or natural disasters in their life, which in fact brought them here.

“So in our estimate, over 60 per cent of the total 35 lakh-strong migrant population in the state are still in Kerala, or living in congested rented spaces. So the first priority of the state should be to decongest spaces where highest concentration of migrants exists. Then only the fight against the Coronavirus will yield results,” he said.   There are places in Ernakulam where migrants reside in rented facility on a shift basis. When one batch is in the workplace, the second batch will be in the room and once the first batch comes out after their shift, the employees in the room will go out for their shift. After the lockdown, all these labourers who had worked in two shifts converged at one place, said a labour contractor.

Unable to pay rent, migrant workers asked to leave
Kochi: A landlord on Thursday asked 27 migrant workers and three others to vacate the building they lived in near a government school at North Paravoor here for not paying the daily rent of Rs 110. However, the issue came to the notice of municipal health officials who alerted the police. The police officials reached the spot and settled the issue after holding talks with the owner who then allowed the migrant workers to stay, said a police officer.