Ernakulam and Wayanad will be included in the green zone. The remaining 10 districts including the state capital Thiruvananthapuram will be in the orange zone.

THIRUVANANTHAPURAM: According to the new hotspot classification issued by the Union government, to be in force after May 3 when the second phase of the nationwide lockdown ends, Kerala will have two districts each in the green and red zones while the other 10 districts will be classified as orange zones.

Kannur and Kottayam districts will now fall in the red zone while Ernakulam and Wayanad will be included in the green zone. The remaining 10 districts including the state capital Thiruvananthapuram will be in the orange zone.

The Union government has already sent directions to the respective Chief Secretaries in the country. The Centre's move is a prelude to taking a decision over the relaxations to be effected after the second phase of the lockdown ends on Sunday.

Kerala Chief Secretary Tom Jose told reporters on Friday that the state will follow the Centre's directions and take steps to revise the zonal classifications based on the positive cases reported. 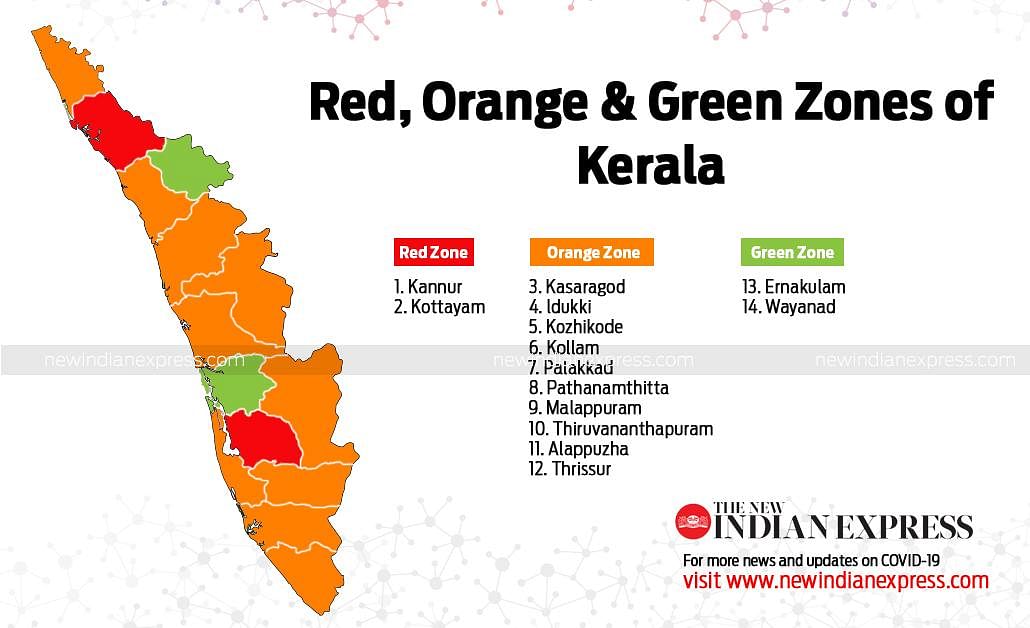 A letter from Preeti Sudan, Secretary, Health and Family Welfare, to all the chief secretaries said that a district will be considered to be in the green zone if there are no confirmed cases so far or there is no reported case for the last 21 days in the district.

The Centre made clear that it's a dynamic list. "The list will be revised on a weekly basis or earlier and communicated to states for further follow-up action in consonance with the directions issued by the Ministry of Home Affairs under the Disaster Management Act, 2005. It is further highlighted that based on field feedback and additional analysis at the state level, states may designate additional red or orange zones as appropriate. However, states may not relax the zonal classification of districts classified as Red or Orange as communicated by the Ministry. For the districts having one or more municipal corporations, the corporations and other areas of districts may be treated as separate units. If one or more of these units have reported no cases for the last 21 days, they can be considered as one level lower in zonal classification, in case the district is in Red/Orange Zone. District authorities should, however, exercise due to caution in such areas so that these areas remain free from COVID19 cases", the letter said.

The letter also pointed out that it was critical to ensure that necessary action for containment so as to break the chain of transmission of the virus is initiated in both red and orange zone districts.

Now we are on Telegram too. Follow us for updates
TAGS
Kannur Kottayam Red Zones Covid-19 coronavirus