Didn't transport virus, stop spreading rumours,  pleads truck driver | Says this is the first such experience in his 35 years as a lorry driver

KOZHIKODE: After Ameer who was touted as the super spreader of Kasaragod, all eyes are on the 52-year-old truck driver, Joseph (name changed), of Mananthavady through whom 13 persons got infected with Covid-19 in Wayanad, of the total 18 patients in the district. Speaking to TNIE, the truck-driver laments that he is being treated as a criminal.

“I have been driving lorries for 35 years. I have been travelling to and from Koyambedu vegetable market in Chennai with loads for the last six years. This is the first-of-its-kind experience. I had not transported the virus from Koyambedu to Wayanad. Please don’t spread rumours,” he pleads. 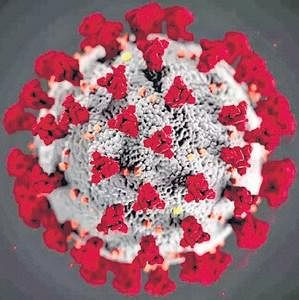 He said he reached Koyambedu with a load of ginger on April 21 night. “I spent two nights and a day at Koyambedu for unloading. The Koyambedu market is active at night. My co-driver (cleaner) Anto (name changed) and I slept in the lorry. We returned early morning on April 22,” he recalled. The duo then halted 12km away, at Velappanchavadi, for two days for loading urea to Wayanad. “I reached Wayanad on April 25. The urea was unloaded at Meenangady the next day. Here, I visited the urea godown at Meenangady to give the cash receipt and at a furniture shop at Nalaam Mile to look for a cot, then recharged my TV subscription from a nearby shop and visited a fruit shop at Mananthavady before reaching home,” he said.

On April 28, the health staff took his sample after Koyambedu came to be known as a Covid-19 hotspot. Joseph tested positive on May 2. Since then, he has been admitted in the Government District Hospital at Mananthavady.  “It was being spread that I had visited Thirunelly. I last visited there two years ago. I am being portrayed as a villain who deliberately spread the disease. It is too much to bear,” he says.
All seven family members living at Joseph’s house that comes under Kurukkanmoola PHC have been infected. “I fully agree that my family members were infected from me as I was at home. But I don’t understand the reports that I spread the virus to others including police personnel,” he says. 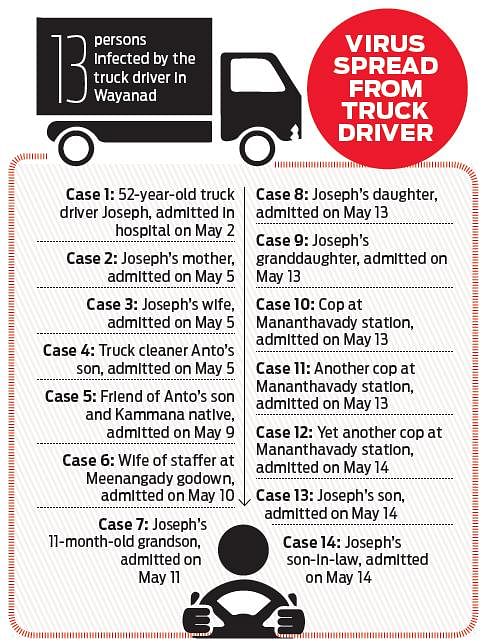 Cleaner negative
Anto, the lorry cleaner who spent five days with Joseph in the lorry, tested negative in three tests. “The result of the fourth test is awaited,” said Anto. But on May 5, his son, 20, tested positive. Four days later, a 20-year-old friend of Anto’s son from Kammana too turned positive. The Kammana youth was booked for riding triple on a motorcycle and summoned to Mananthavady police station on April 18 and May 2, resulting in three cops testing positive. “Anto’s immunity could be the reason. Also, the virus could have had a short life span in Anto’s body before we took the sample,” said DMO Dr R Renuka. Anto’s wife and daughter have tested negative.

How Anto’s son got infected
“How did Anto’s son get infected? The last time I saw him was two years back. How could you say he got the virus from me?” asks Joseph, to which the health department doesn’t have a clear answer. “We have not come across any evidence of Anto’s son getting infected from anyone else,” says the DMO. Anto’s son and his friend were working in a bar at Nilambur and the duo returned to Wayanad on March 23. “Since then, my son has been at my house and did not meet his friend,” asserts Anto. Another positive case is a 45-year-old woman of Meenangady, the wife of an employee who was present at the godown during Joseph's visit. However, the staffer tested negative.

“I am getting good care here. I am disappointed only by the rumours,” Joseph reiterates. A 25-year old youth of Nenmeni, who was working at a workshop in Koyambedu, came to Wayanad on May 9 and tested positive for Covid-19. Thus, the total number of cases with Koyambedu links has risen to 15.

More from Kerala.
Now we are on Telegram too. Follow us for updates
TAGS
super spreader Kasaragod Wayanad COVID 19