The rain gained strength after the formation of low pressure over the Bay of Bengal on Sunday morning. 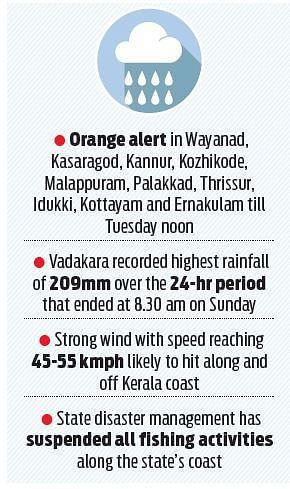 Meanwhile, an orange alert has been sounded in 10 districts, except Thiruvananthapuram, Kollam, Pathanamthitta and Alappuzha, from Monday till Tuesday noon. The rain gained strength following the formation of a low-pressure over the Bay of Bengal on Sunday, which is expected to strengthen further. Vadakara in Kozhikode district recorded the highest rainfall of 209mm in the 24 hours that ended at 8.30am on Sunday.

In Kasaragod, around 20 families were shifted to safer locations, fearing landslides in Vellarikkundu taluk in the wake of incessant rain that has been lashing the district for the past two days. The district received 188mm of rain in 24 hours. In Idukki, a man who was trapped under the Kunjithanni bridge  after the water level rose in Muthirapuzha following heavy rain was rescued by fire and rescue personnel.

With the water level rising in the Chalakudy river, the district administration has issued an alert to the people living on the the banks of the river in Kunnukara, Parakkadavu and Puthanvelikkara panchayats.
Three units of the National Disaster Response Force have reached Kerala after rain gained momentum. The three units are now positioned at Wayanad, Malappuram and Thrissur. Already two teams are positioned in Idukki and Kozhikode districts. The water level in Sholayar, Kallarkutty, Poringalkuthu, lower Periyar, Mangalamdam, Muzhiyar and Banasura reservoirs have reached near the full reservoir capacity and authorities have issued the third stage of alert.