Addressing the peace committee meeting, Collector TV Subhash called for the sincere support and cooperation of all the people concerned.

KANNUR: The investigation into the murder of Muslim League supporter Mansoor at Pullukkara near Panur on Tuesday night has been handed over to district Crime Branch (CB). Kannur City Police Commissioner R Ilango said a 15-member special team led by DySP K Ismail has been formed to probe the case.

“The police have already identified 11 persons involved in the attack. But the assailants have absconded. Seven of the gang members who had attacked Mansoor are from the neighbourhood,” Ilango told reporters here on Thursday. “So far, one person — identified as Shinos, a DYFI member — has been arrested in connection with the murder,” he said. 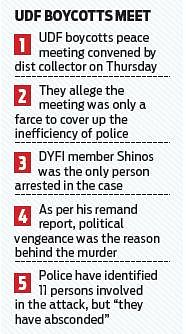 “As per the statement of Shinos — who has been remanded in judicial custody — the attack was carried out not with the intention to murder and the assailants’ target was Mansoor’s brother Muhasin,” he said. “However, the real motive would be known only after all the accused are nabbed,” he said.

Earlier in the day, the UDF boycotted the peace meeting convened by the district collector to ease the tension prevailing in the area following Mansoor’s murder and the subsequent violence, where in several CPM offices were vandalised.

UDF leaders alleged that the police have been acting in a discriminatory manner by arresting League workers in connection with the violence at Peringathur, but not arresting even a single person for Mansoor’s murder.

Though UDF leaders, including DCC president Satheeshan Pacheni, UDF district convener P T Mathew, Muslim League district general secretary Abdul Karim Cheleri and state vice-president V K Abdul Khader Moulavi, reached the collectorate before 11am — the scheduled time for the meeting — they expressed their anger against the “onesided stance of the police” and boycotted the meeting. They said the meeting was only a farce to cover up the inefficiency of the police.

“The police have failed miserably in ensuring justice to the family of Mansoor,” said Pacheni. “Even as 48 hours have passed since the attack, the police could not nab any person in connection with the murder. The only person nabbed was, in fact, handed over to the police by injured Muhasin (Mansoor’s brother). This is shameful,” said Pacheni.

“The police, who failed to arrest the culprits involved in the murder, have already arrested 10 League workers in connection with the violence took place in Peringathur. They beat up League workers who had acted out of indignation over the murder of their fellow party man,” said Abdul Karim Cheleri.

“The police didn’t  act even after UDF gave enough evidence regarding the distribution of weapons by a DYFI leader in connection with the attack. Those who have come here to attend the peace meeting are the leaders of the murderers,” said Pacheni.

Addressing the peace committee meeting, Collector TV Subhash called for the sincere support and cooperation of all the people concerned. The meeting condemned the murder of Mansoor and the violence that followed in connection with the funeral procession. The meeting urged the police to arrest all the people involved in the violence and Mansoor’s murder.

“All political parties and people in the district should be vigilant and careful to ensure peace,” he said. “All the accused in the violence will be arrested soon,” Subhash told reporters later. “They have lost one of their workers and the district administration understands the sentiments of UDF leaders,” said Subhash. “But, they too will cooperate with the attempts to restore peace in the district,” he said.

After the meeting, the city police commissioner said: “There has been no deliberate delay by the police in taking action. We have taken an impartial stand. It would be impossible for the police to concentrate only on the murder, when violence hits an entire region. The police will investigate all incidents in connection with violence and take strict action,” he said. To bring the region back to normal, the police have beefed up security arrangements, he said.

Now we are on Telegram too. Follow us for updates
TAGS
IUML worker murder Political Violence CPM