Earlier   in the day, the CB team led by DySP K Ismail reached the house of Mansoor around 10am and recorded the statement of his father Musthafa.

KANNUR: Even as the Crime Branch (CB) launched its probe into the murder of Muslim League supporter Mansoor at Pullakkara near Panur, the second accused in the case was found dead in a deserted compound at Kalikkulamb near Nadapuram in Kozhikode on Friday.

35-year-old Ratheesh Kooloth, a CPM worker, was found hanging from a tree by local residents, who informed the police. Police squads from Chokli, Valayam and Nadapuram reached the spot and identified him as Ratheesh, who had absconded from Kannur after Mansoor was reported dead on Wednesday early morning. Ratheesh was an employee at a welding shop at Parakkadavu.

It is learnt that the CB team, which checked the mobile phone of Shinos — the DYFI worker who was arrested on Wednesday — has got some vital information regarding the conspiracy behind the murder. The phone was recovered from the crime scene as Shinos reportedly lost it during the scuffle with League workers who caught him when he tried to flee. 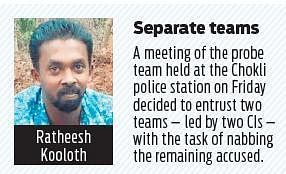 The police checked the WhatsApp messages and reportedly found enough evidence regarding the sourcing of of weapons for the attack. Some of the messages sent to his friends were found deleted. The police also found some messages in which Shinos had given information about his whereabouts to the fellow accused who had absconded. The phone has been handed over to the Cyber Cell to retrieve the deleted messages.

Meanwhile, the UDF leaders flayed the delay in arresting the remaining accused in the case. Congress state working president K Sudhakaran said the UDF doesn’t believe in the probe team and expects no justice from it. Muslim League national general secretary P K Kunhalikutty said the investigation team is trying to protect the murderers.

Coming out against the police probe, Sudhakaran said: “The man who leads the investigation is a close associate of CPM leaders. How can we trust an investigation being led by this person,” he asked. He said the role of Akash Thillankeri, an accused in the murder of Youth Congress worker Shuhaib, should also be investigated.

He alleged that there were similarities in the way both Mansoor and Shuhaib were attacked. “The murder of Paral Manzoor is not part of a usual political clash. It is a well planned murder. Local CPM leaders are involved in the conspiracy which led to the murder. We don’t trust the investigation team. The police officers in the team are obedient to the CPM leaders.

The investigation should be handed over to some other agencies. At least, an officer in the IPS rank should investigate the case,” said Kunhalikutty. A meeting of the investigation team held at the Chokli police station on Friday decided to entrust two teams -- led by two CIs -- with the task of nabbing the remaining accused. The two squads have started search for the accused who have absconded.

Now we are on Telegram too. Follow us for updates
TAGS
CPM IUML Political Violence