If a woman feels she is nothing without man’s support, that’s failure of system: Kerala HC

KOCHI: If a woman  feels she is nothing without the support of a man, that is the failure of the system, the Kerala High Court observed while considering the plea of a reunited couple to get back their child which was adopted by a childless couple.

While describing the woes of a single mother, the court also quoted a couplet from Manusmriti --- “Yatra naryastu pujyante ramante tatra devata, yatraitaastu na pujyante sarvaastatrafalaah kriyaah” (where women are honoured, divinity blossoms there, and where women are dishonored, all action no matter how noble remain unfruitful.)

Justice A Muhamed Mustaque and Justice Kauser Edappagath observed the case of John and Anitha (names changed) unbundled the trauma of a couple in a live-in relationship, isolation of a single mother, love of a mother for her child and rights of the biological father. John and Anitha, who are social workers, met during the floods that devastated Kerala in 2018. During their live-in relationship, Anitha gave birth to a child. 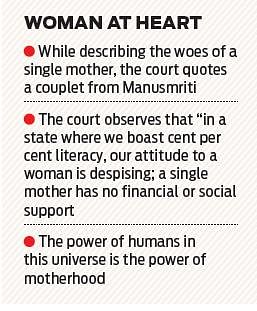 An artist by profession, John later left for Karnataka to act in a film. Later, he appears to have broken the relationship with Anitha for a while or remained elusive. Anxious Anitha made attempts to contact John, but in vain. Distraught and devastated, Anitha handed over the child to the Child Welfare Committee on May 8, 2020. Thereafter, she constantly kept in touch with the committee and the Child Care Institution where the child was put up, to keep a track of its wellbeing.

The court pointed out that the chat messages of Anitha with the social worker depict how vulnerable it is for a woman to become a mother, not in a legally wedded relation. Desperation and plight of motherhood reflected through the chat messages that depict the care for the baby from the womb of the person, Anitha. The child thereafter was given in adoption to a couple on February 2, 2021. However, after John returned to Anitha, the reunited couple approached the High Court to get back their child.

HC: Woman’s womb a precious possession of her personhood

The bench said that in view of the willingness of the biological father to take care of the child, the committee should consider the couple’s plea. The court also set aside the certificate declaring that the child was legally free for adoption under section 38 of the Juvenile Justice Act.The court observed that “in a state where we boast cent per cent literacy, our attitude to a woman is despising; a single mother has no financial or social support. She faces emotional challenges and is forced to believe she is destined to be isolated as a result of guilt. She gets hardly any support from the system. It is time for the government to evolve a scheme to support the single mother.”

The court observed that “what Anitha had to face as a single mother is a hurdle created by society. Anitha never attempted to exterminate her womb; she bore the pain to give birth; like every mother, she loved to care for the child, but was not allowed by circumstances in society. She thought without the support of a man, she cannot survive. If a woman feels she is nothing without the support of the man, that is the failure of the system. She shall not succumb to the temptation of giving up.

“The power of humans in this universe is the power of motherhood. It is for the state to make her realise that her struggle with the forces undermining her existence can be validated with the support of rule of law. That self-belief must be her identity and respect due to her”.The court also added that “a woman’s womb is a precious possession of her personhood and no one can claim right over it; except with her consent.”

In a live-in relationship, a couple acknowledges mutual rights and obligations. It is more of a contract. Offspring in such a relationship is acknowledging the biological parental rights of both, observed the court.

Now we are on Telegram too. Follow us for updates
TAGS
Kerala High Court live-in relationship Kerala couple Single Mother