Political observers say unlike earlier, woman voters now make their choice based on candidate, other factors

Though the number of female voters is high in all the districts compared to male voters, low participation by woman voters in these constituencies has been a worrisome factor for UDF, LDF and NDA as all these fronts have been betting big on woman votes for smooth sail of their candidates in the polls.While LDF relied on food kits and pension to garner woman votes, the UDF targeted more woman votes pitching high pension amount (Nyay) as poll promise apart from using Sabarimala, back-door appointments by LDF government and gold smuggling case.

The NDA too made Sabarimala and gold smuggling main poll plank to woo woman voters. “On earlier occasions, if the woman voter turnout was less, then generally it’s seen as dampener for UDF’s prospects. But now, it’s hard to predict as woman voters sway their preferences between LDF, UDF and NDA based on candidates and other related factors. Moreover, women from middle class and upper middle class families in these districts don’t prefer casting their votes,” said political commentator advocate A Jayashankar. 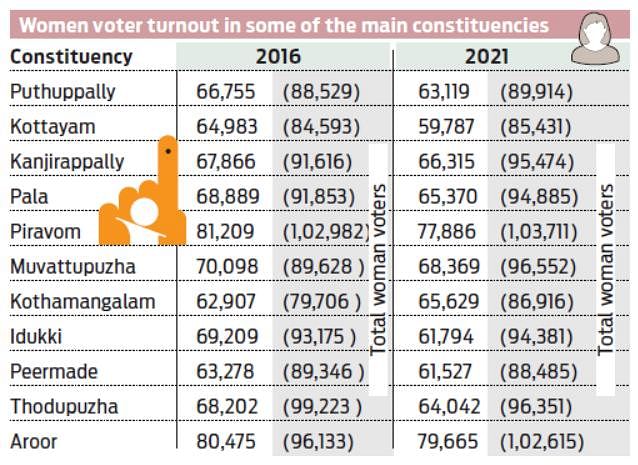 While Covid-19 pandemic fear has also been cited as one of the reasons, experts also cite the low woman cadre strength of political parties in Central Kerala compared to north and south regions in the state. “Urban centres like Ernakulam generally see less number of women voters casting their votes. We need to look at the age of woman voters who stayed away from polls to really assess its impact. Anyway, this trend is not so rosy for the political fronts at a time when battle has become fierce,” said Centre for Public Policy Research (CPPR) chairman D Dhanuraj.

Now we are on Telegram too. Follow us for updates
TAGS
women voters Central Kerala