Lockdown takes a toll on jumbos too

With festivals restricted and parades banned, captive elephants in the state must have had a rare break but 19 of them died since March 2020. A look

THIRUVANANTHAPURAM: The novel coronavirus outbreak and subsequent lockdown gave the captive elephants, one of the most tortured and over-exploited lot in the God’s Own Country, a rare break from the high-octane festivals in the state. However, for many in the tusker brigade of Kerala, the lockdown has not been a blessing as anticipated.

Though 90% of the festival season was washed out in 2020 following the Covid outbreak, the state witnessed the death of 19 elephants and 2021 began with the death of celebrity tusker Mangalamkunnu Karnan in Palakkad and 34-year-old Kadavallur Sivaprasad in Thrissur. In fact, the annual death rate of captive elephants had dropped by nearly 50 %to 19 in 2019 from 34 in 2018. 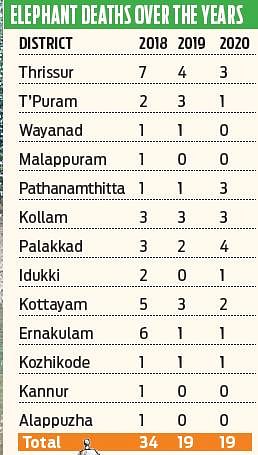 Since Kerala has banned the sale and traffic of captive elephants, the death rate of ageing jumbos in the state is supposed to register a marginal increase every year. But the state could reduce the number of jumbo deaths to 19 just a year after the Forest Department took stringent measures to ensure their welfare.

V K Venkitachalam, secretary of Heritage Animal Task Force, told TNIE, “It’s true that after 2018, the forest department has started to enforce the provisions of the Kerala Captive Elephants (Management and Maintenance) Rules, 2012, more stringently like ensuring mandatory field visits by forest officials and recording the inter-district movement of elephants by introducing an elephant movement register.”

But the sector needs more healthy intervention from the part of the forest and state administration if the death stats of the lockdown period are any indication. “Since the state banned elephant parades during festivals on March 16, 2020, following the Covid outbreak, as many as 17 elephants died and most of them were in their prime age as compared to the age of jumbos that died in the previous years, warranting an urgent intervention of officials to ascertain the causes of their deaths,” he said.

Dr Jacob Cheeran, elephant veterinarian and tranquilliser dart expert, said, “The Covid period reduced the number of festival parades and the over-exploitation of tuskers. But elephants are facing a lot of other serious health issues. A captive elephant needs to walk at least 4km or one hour in a day which is helpful for its blood circulation and bowel movement. In fact ‘walk and eat’ is the system of elephants. Lack of movement will cause a lot of issues for their health including arthritis which can eventually prove fatal,” he said.

Further, many jumbo owners are now employing only one mahout to attend to an elephant instead of three earlier as part of cost-cutting measures. This will also ultimately reflect on the health of the elephants,” he added.  The experts in the field urged the state government to take urgent inter-departmental actions to reduce the death rate of captive elephants in post-Covid period.

Now we are on Telegram too. Follow us for updates
TAGS
Lockdown  elephants