Large areas of Ashtamudi have been reclaimed for development projects and more are earmarked for upcoming projects.

KOLLAM: The Ashtamudi lake in Kollam district, state’s second largest lake, and one of the three wetlands in the state listed under the Ramsar convention is facing serious environmental degradation. Home to several plant and bird species, the lake was declared a wetland of international importance under the Ramsar Convention on August 19, 2002. But since then little has been done to protect it. Not even a signboard has been placed to indicate the stature of the lake that was numbered Ramsar site 1,204.

“The authorities concerned have carried out minimal work to conserve the Ashtamudi lake. Voluntary efforts by social organisations and local people are keeping it alive,” said V I Rahul, an environmentalist who lives near the lake. e said reclamation, pollution and sand-mining have caused immense damage to the famed water body.

V K Madhusoodanan, another environmentalist, said only a small portion of the special funds allocated by the Union Ministry of Environment and Forests for the conservation of the lake has been utilised. “Almost all courses of the lake have become waste-dumping sites with plastic the biggest threat,” he said. 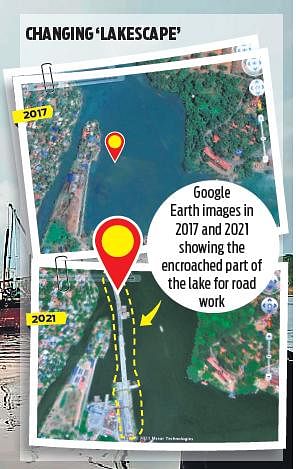 Large areas of Ashtamudi have been reclaimed for development projects and more are earmarked for upcoming projects. The lake that once spanned an area of 61.4 sq km has now shrunk to 34 sq km. Besides encroachment to accommodate the increasing population, the formation of new islets between Dalavapuram, Neendakara and Kavanadu have also contributed to the reduction in the area of the lake.

Outer ring-road extension
Water in the Ashtamudi lake has turned darker with the authorities giving the nod to fill it by destroying mangroves to enable the construction of a ring-road extension. Even the basic environmental clearance from the State Wetland Authority of Kerala (SWAK) has not been taken for the construction violating the Coastal Regulation Zone and the Ramsar norms.

Rahul has filed a public interest litigation (PIL) with the Kerala High Court regarding the issue. The PIL points out that, if the road is allowed, it would severely affect the already disturbed ecosystem of the Ashtamudi wetland. SWAK, Kerala Coastal Zone Management Authority, Kollam district collector, city corporation, Directorate of Environment and Climate Change, Public Works Department and the State of Kerala are respondents in the case.

Road construction
The 2.75 km road, costing B254.4 crore, has been constructed to ease the traffic along the 1.6 km stretch connecting Collectorate Junction, High School Junction and Kollam bus stand. However, the Kollam bypass has apparently made the project irrelevant as a major part of the traffic flows along the bypass. Though the authorities claim the road will be constructed on pillars, the tidal flow of water is likely to be affected.

61.4 sq km was the area of the lake earlier. Now it has shrunk to 34 sq km. Large areas of Ashtamudi have been reclaimed for development projects and more are earmarked for upcoming projects

It’s state’s second largest lake, and one of the three wetlands in the state listed under the Ramsar convention

Litigation against pollution
In 2018, lawyers Boris Paul and V I Rahul had filed a petition with the District Legal Services Authority regarding the increasing pollution in Ashtamudi Lake. Based on their PIL, a meeting was called recently by DSLA secretary Subitha Chirakkal, which was attended by 15 representatives including from Kollam Corporation, district panchayat, State Wetland Authority, PWD, and Suchitwa Mission.

Now we are on Telegram too. Follow us for updates
TAGS
Ashtamudi lake Kollam Pollution