THIRUVANANTHAPURAM: Covid-19 has claimed over 4,000 deaths in the state since the first instance reported on March 28. On Tuesday the state reported 18 deaths thereby taking the total deaths to 4,016.The total toll could be equivalent to the unenviable accident deaths the state reports every year. However when the pandemic reached the state in the last days of January last year it was expected that the death toll would be significant considering its demography and prevalent lifestyle diseases. The reference point at that time was countries such as Italy and Spain, where Covid death rates caused concerns for health administrators as well as the general public here.

Despite the high number of cases reported daily, the death rate in the state was found to be lower while the other states reached the dubious mark long back.  While the government gloats over the low case fatality rate, health experts who keep a track on the deaths have raised doubts over the official figures on the deaths.

The trend worldwide is that the daily death numbers come down weeks after a reduction in active cases and new cases, said Dr Arun N M, a physician and activist who has been tracking the pandemic developments in the state. According to him, similar trends were visible in all other states except Kerala.
The state still has the highest number of daily cases, active cases and weekly growth in the country. 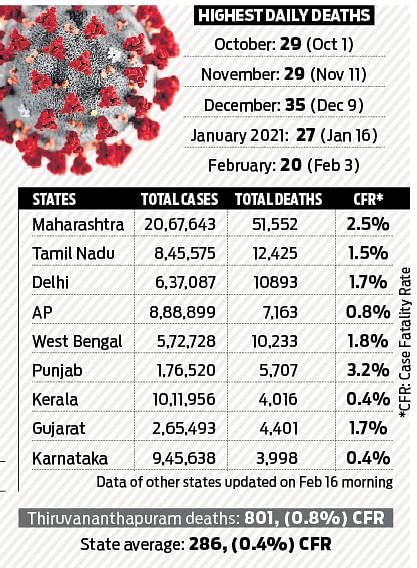 Health experts have pointed out the growing gap in the official death numbers and the ventilator/ICU occupancy in the state. The daily death numbers in the state has come down below 20 in February while the ICU/ventilator occupancy has increased since October, the month which saw a peak in daily cases.

“It is found that 60 out of 100 Covid patients on ventilator support die. However the official death data shows that there has been a 60 per cent reduction in death since October. The mismatch gives another confirmation to our findings that the data has been fudged,” said Dr Arun. According to him, the actual deaths due to Covid would have touched 10,000 by now.

The state does not consider deaths as due to Covid if the patient tests negative. However in other countries all deaths within 28 days after testing positive are considered Covid deaths.  “Most patients die in the third week of infection. Hence patients on ventilator support are Covid negative on antigen tests, except in a few cases, when they die,” said Dr Arun.

A section of health experts who have been tracking the unofficial death figures raised doubts since April first week when the state refused to include the Covid death of a Mahe native.“There have been numerous instances when Keralites dying of Covid after crossing the state borders, not included in the official tally. In fact their deaths are not included in both the states. When the death of a Covid-19 patient became a controversy over allegations of medical negligence, the authorities finally admitted that he died of Covid pneumonia,” said a doctor.

The critics also pointed out the huge difference in the total death toll of Thiruvananthapuram when compared to other districts. “The deaths in Thiruvananthapuram are double the state average. If it is not due to the relative fair reporting in the capital district then it should call for a separate study,” said Dr Arun. According to him the lack of transparency in reporting would affect future studies on the impact of the pandemic.

However not all agree with the correlation between ventilator occupancy and deaths. “The numbers show the occupancy of non-invasive ventilators and invasive ventilators. The patients in the latter are the riskier group. The health system in the state is so well planned that all needy patients get access to an ICU or ventilator support despite the challenge of over one million cases,” said a public health expert, who is a member of a state government-formed Covid-19 core committee.

‘Better vigil helped keep toll in check’
T’Puram: Chief Minister Pinarayi Vijayan said public vigil and intervention of the state helped keep death rates in check. He said the death analysis showed that Kerala had fewer deaths even in a pandemic year. Work mortality dataset published by a joint research of various universities found that deaths increased in 51 countries while only six, including New Zealand, Australia and Costa Rica, could reduce it. “We could keep deaths in check when compared to many developed countries,” said Pinarayi. Citing the death registry in state, he said total deaths in 2020 were 11.2% less than 2019. “Break the chain helped in keeping the spread of disease in check. Improvement in health infrastructure helped in avoiding saturation of Covid patients in hospitals,” he said.

Now we are on Telegram too. Follow us for updates
TAGS
Kerala COVID 19 covid deaths