Crimes against women, kids go up

Fewer Pocso and rape cases were reported in 2020, owing to the pandemic and lockdown.

THIRUVANANTHAPURAM: Though the government has initiated various measures for women and children, including setting up of ‘Nirbhaya’ shelter homes and others, there has been no drop in the number of crimes against them. In fact, the reported cases of sexual abuse of children have been on the rise since 2016. More cases of women’s rape have also been registered. Fewer Pocso and rape cases were reported in 2020, owing to the pandemic and lockdown. 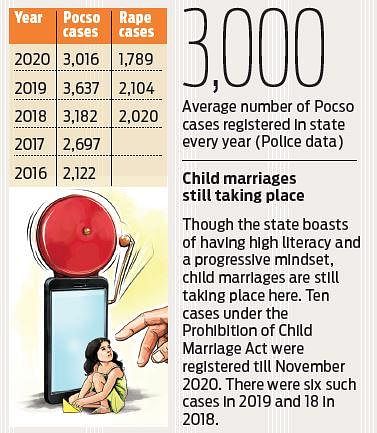 Psychiatrists say crimes against children are taking place mainly due to the lack of mental support and love from their families. “The pressure of modern busy lifestyle with more stress on academics has led to an emotional gap between children and parents. As a result, parents are often unable to talk about healthy sexuality with children and children often don’t get a chance to open up about such issues with parents,” said Dr Arun B Nair, Psychiatrist, Medical College, Thiruvananthapuram. He said another problem is digital addiction among children which has led to instances of them being sexually exploited more through online grooming. “The solution would be that parents, especially fathers, take up the responsibility of empowering children about sexuality. The school curriculum should teach life skills, including training children to be assertive,” he said.

21 injured in Kerala after lorry collides with KSRTC bus