Biju Prabhakar, 55, who has taken on the all-powerful trade unions in the KSRTC in a bid to put the debt-ridden state carrier back on the rails,  told TNIE that he is keen on reviving the  KSRTC.

THIRUVANANTHAPURAM: Several prominent persons who had made a mark in their respective fields are among those being considered by the KPCC as part of its efforts to field fresh faces in the assembly polls. Leading the pack is Biju Prabhakar, KSRTC managing director, former chief secretary Jiji Thomson and retired High Court Judge Justice B Kemal Pasha.In a marked shift from the past, even before seat allocation, the local leadership has taken the initiative to sound out eminent personalities on their possible candidature. 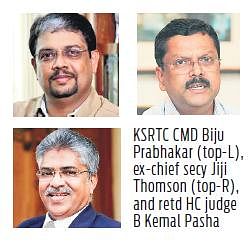 Biju Prabhakar, 55, who has taken on the all-powerful trade unions in the KSRTC in a bid to put the debt-ridden state carrier back on the rails,  told TNIE that he is keen on reviving the  KSRTC.“During the 2019 Lok Sabha elections, senior Congress leaders had approached me. But I declined saying I am not candidate material. Local leaders from Kayamkulam have been imploring me to contest from there. Now my aim is to turn the KSRTC around,” said Biju Prabhakar, son of the late Congress minister Thachadi Prabhakaran.

Jiji Thomson, who was the chief secretary during the previous government’s tenure, has been approached by the local leadership to contest from Vattiyoorkavu assembly constituency in Thiruvananthapuram. He is also a voter in the constituency. Though this 1980 batch IAS official was an active KSU member in school and college, he sees himself as a misfit in ‘politics’ now.

“Despite the pressure from various quarters, I have no plans to contest from Vattiyoorkavu or from any other constituency. I feel that younger people should be fielded,” the 64-year-old told TNIE.    Jurist Kemal Pasha, 64, has already evinced keen interest in contesting from Ernakulam district. A senior KPCC vice-president told TNIE that the party is contemplating fielding Pasha in his native Punalur.

Now we are on Telegram too. Follow us for updates
TAGS
KPCC congress Kerala assembly polls Bureaucrats