Kerala assembly polls: Consensus in UDF, Congress to contest in 95 seats, IUML in 26

Muslim League to get 26 seats, Kerala Cong Joseph faction eight-nine, RSP five and other allies one seat each

KOCHI: As seat-sharing talks enter the final stage, the constituents of UDF have reached a general consensus as to the number of seats each of them would contest. As per the agreement, Congress, the main constituent, will contest in 95 seats and Muslim League, the second largest constituent, in 26 seats. While P J Joseph faction will get nine seats and RSP five, Kerala Congress (Jacob), CMP, Forward Bloc and Nationalist Congress Kerala floated by former NCP legislator Mani C Kappan and Janata Dal faction will get one seat each, according to the sources. The final decision will be taken only at the high-level meeting of the UDF on Wednesday.

“As per the agreement reached, Congress would contest in 95 seats. Talks have been completed with all allies except Kerala Congress as P J Joseph is under quarantine after testing Covid positive,” said a senior UDF leader. As Congress, which is on a do-or-die battle in the state, is keen on contesting the maximum number of seats and thereby wrest power.

The Joseph faction demanded all 15 seats contested by the united Kerala Congress (M) in UDF but they later relented and agreed to 12 seats. However, the Congress is looking to make the Joseph faction settle for eight seats, or a maximum of nine. “The four seats -- Thodupuzha, Kaduthuruthy, Kothamanagalam, and Kuttanad -- in which the faction had contested last time when they were with KC(M) -- and Tiruvalla and Irinjalakuda contested by Joseph M Puthussery and Thomas Unniyadan, respectively, who are now with Joseph faction, will be allocated to them. Talks are underway on Changanassery seat, represented by former Mani group leader late C F Thomas, who had later switched to Joseph camp. Joseph faction is also demanding Kanjirappally and Idukki seats,” said a senior leader, who requested anonymity.

The Congress which contested 87 seats in 2019 will get additional eight seats while Muslim League which contested in 23 seats -- plus one League-backed independent -- will get an extra three seats. “From this equation, it is clear that League will not emerge a superpower in UDF. This will also end the hate campaign against it by both LDF and BJP,” the UDF leader added.

According to the leaders, UDF will counter the allegations of both LDF and NDA by projecting its people’s manifesto, which contains a slew of pro-people programmes including ‘Minimum Income Guarantee Scheme’ (MIGS), formally called Nyuntam Aay Yojana (NYAY).

Talks on exchange of a few seats by the allies are under way. The Congress and League are keen on allocating a safe seat to CMP leader C P John, considering his acceptance. Besides, the front will also allocate a seat to Forward Bloc leader G Devarajan. Rumours are rife that he would be fielded against chief minister Pinarayi Vijayan.According to sources, the Congress will finalise its candidate list by March 5 and send it to the high command for approval. 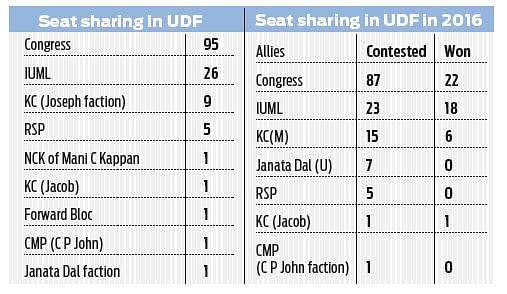