THIRUVANANTHAPURAM: Following  strictures from the High Court and several complaints of fleecing from different parts of Kerala, the state government on Monday capped the maximum amount that a private hospital can charge from a Covid patient undergoing treatment at a private hospital.The new rates have been enforced with immediate effect, said the order issued by the principal health secretary. The hospitals flouting the rates shall be liable to pay a penalty which shall be 10 times the additional charges.

A patient staying in a general ward needs to pay only Rs 2,645 per day, as per the order. The rate is inclusive of registration, bed charge, nursing, consultation, oxygen, medicines, lab tests, etc. However, charges for advanced investigations (CT scans), PPE kits, costly medicines such as Remdesivir and Tocilizumab have been excluded. 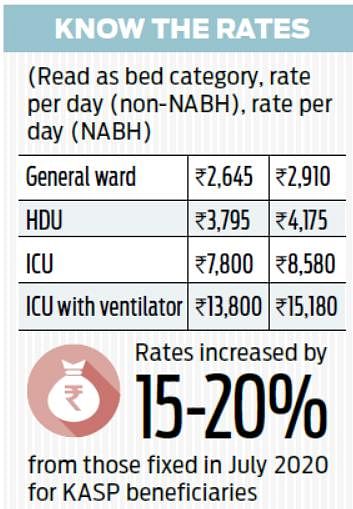 The rate for availing high dependency unit has been capped at Rs 3,795, ICU at Rs 7,800 and ICU with ventilator at Rs 13,800 in hospitals not accredited by National Accreditation Board for Hospitals & Healthcare Providers (NABH). The patients will have to shell out 10% more in an NABH-accredited hospital.

The billed price of PPE will be the same as the purchase price paid by the hospital. The rates fixed for patients who are beneficiaries of Karunya Arogya Suraksha Padhathi, however, has been increased by 15-20%. Even after the latest order capping the rates, bills from private hospitals are likely to burn a hole in patients' pockets.

“The announced rates are still very high for the people though in the time of a health emergency people would pay that to save lives. The MRP mentioned in a PPE kit is often very high. While the medical stores sell it for half the price, the hospitals extract the full rate from each patient even though the staff would be wearing one for attending all the patients in a ward,” said consumer rights activist Dijo Kappan.

Private hosps  must not insist  on advance payment: Govt

The government has also mandated all private hospitals to admit the patients immediately as per the admission protocol, through the order. No advance payment shall be insisted for at the time of admission and emphasis shall be on patient care.Charges for various treatments, consumables, medicines, doctors and nursing should be made known to the public through display boards in hospitals and on its websites.

The new rates will be applicable for patients directly approaching the hospital while the beneficiaries under Karunya Arogya Suraksha Padhathi and government-referred patients will continue to avail free treatment for Covid in all the empanelled private hospitals.Anyone can level a complaint against overcharging by the private hospitals to the appellate authority formed under Kerala Clinical Establishment Act. The authority is headed by C K Padmakaran with Dr V Rajeevan and Dr V G Pradeep Kumar as members.