One in 100 COVID-19 patients in Kerala needs critical care

Experts warn that even though the hike is marginal, it has potential enough to choke our critical care system as ICU beds are lesser.

By B Sreejan
Express News Service

THIRUVANANTHAPURAM: The spike in new COVID-19 cases and the death toll have triggered panic among the public. But a close look at the active case statistics for the last two weeks proves that the number of critical cases is still less in the state. The critical cases were identified by  counting patients who required ICU and ventilator admission.

Though the number of daily deaths shows proportional increase with the hike in  active cases, the mortality rate is also under control. As on Thursday  when the daily death toll touched a new record of 97, total COVID-19 deaths were 6,150 and the mortality rate remained at 0.30 per cent, one of the  least in the country.

In the final week of April, the  percentage of patients requiring critical care fluctuated between O.70  and 0.78.

In fact, the figure had hovered around 0.70 per cent since the  second wave began. That meant only three of the 400 COVID-19 patients required ICU admission. The figure was in the same range in  the first week of May too.

However, there was a marginal increase in  this figure in the second of May. The number of critical cases touched  0.90 for the first time on May 8 and showed values ranging from 0.94 to  0.96 in the days that followed. That means one out of 100 COVID-19 patients require ICU/ventilator admission now.

Experts warn that even though the hike is marginal, it has potential enough to choke our critical care system as ICU beds are lesser. Complaints of patients finding it  difficult to find an ICU bed are heard more from different parts of the  state of late.

Dr N M Arun, who closely follows the state’s Covid data, said the number of ICU patients remaining the same is more because of  the static ICU facilities in the state. "There is no growth in the ICU/ventilator capacity and most of these beds remain full. I can say  ICU beds have been full for the past few days in Palakkad district. I am  not fully aware of the situation in other places," said Arun, who practises in  Palakkad.

Another doctor in government service, on condition  of anonymity, said the number of patients requiring ICU care is  more among the youth these days. "We see people in their 30s and 40s  requiring critical care. It is not a good sign," he said.

Ever since  the first wave, the state has tried to keep the number of deaths and critical care patients at the minimum threshold.

Mortality rate under control in state

Though the number of COVID deaths reported daily has increased in proportion to the hike in active cases, the mortality rate in the state remains under control. As on Thursday, when the daily toll touched a new record of 97, the mortality rate remained at 0.30 per cent - one of the lowest in the country. 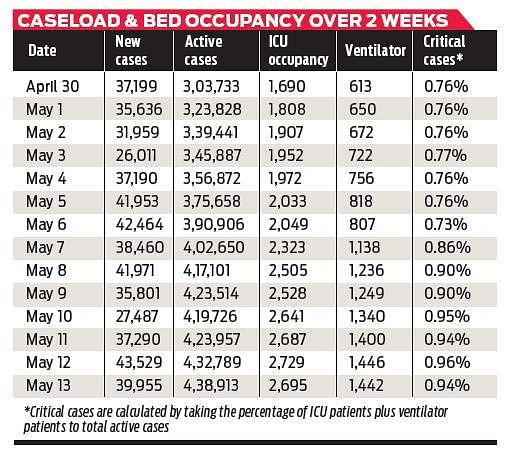 Now we are on Telegram too. Follow us for updates
TAGS
COVID19 Coronavirus Kerala COVID care Kerala COVID patients