‘Astra’ goes up in smoke

Two missions by two premier organisations on Wednesday. One achieved a stupendous success and another failed miserably.

BHUBANESWAR: Two missions by two premier organisations on Wednesday. One achieved a stupendous success and another failed miserably.

While Indian Space Research Organisation (ISRO) successfully launched RESOURCESAT-2A satellite from Sriharikota, Astra missile, developed by Defence Research and Development Organisation (DRDO), reportedly exploded immediately after it was fired from an aircraft. Defence sources said the air-to-air beyond visual range missile, which was fired from an aircraft, veered off the trajectory and nose-dived before causing a huge explosion on ground. 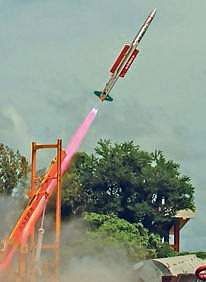 “It was a user trial of the missile by the Indian Air Force (IAF). The missile lost velocity within a few seconds after the firing, then it slipped from intended trajectory and dropped down rapidly. It latter exploded on the sea beach causing huge noise and smoke,” a source said.

The impact of the explosion was so high that the vibration was felt inside houses in Balasore town, nearly 15 km from the test range and people heard a boom. Jayakrushna Sarangi, a life planner, said there was a big noise and it appeared as if an aircraft had crashed. “Since the city is close to the test range, we often hear the sound of missile and shell testing, but this was huge,” he said.

The anti-aircraft missile, which is claimed as more advanced than the similar class of missiles of the US, Russia and France, also had failed to deliver the desired results during its developmental trials in May, 2011.