BHUBANESWAR: India’s first home grown subsonic cruise missile Nirbhay failed ‘miserably’ during a developmental trial on Wednesday with the weapon system deviating from the pre-designated trajectory forcing the mission team to abort it.
Indigenously developed by Defence Research and Development Organisation (DRDO), this long range nuclear capable missile was test-fired from the Integrated Test Range (ITR) off Odisha coast at about 11.46 am. 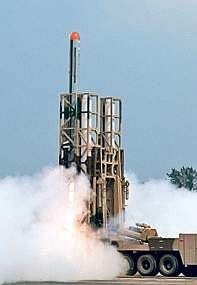 The missile blasted off from a mobile launcher specifically designed for Nirbhay by the Vehicles Research and Development Establishment (VRDE). It was fourth trial of the weapon system.
A reliable source said the weapon system developed snags in its flight control software and veered off the intended trajectory. The destruction command was given in less than four minutes and the missile plunged into the sea.

“The engine lost its thrust a couple of minutes after take off. The flight control hardware and software failed to actuate the control surfaces,” the source said.
As per the programme, the missile was to fly nearly one hour and cover full strike range of 1,000 km. A Su-30MKI aircraft was deployed to track the missile. Prior to the test, ‘The Express’ had raised doubts on the outcome of the test and reported that the missile was pushed for trial even as the problems in the flight control and navigation software were not sorted out.

Last year, the missile performed in a similar manner and the mission was aborted mid-air after 700 seconds following which an inquiry committee led by National Aerospace Laboratories (NAL) Director Shyam Chetty was set up to probe the fiasco.

“The committee had recommended to go for further trials after fixing the snags. But it seems the recommendation was not adhered. The Nirbhay team was not ready for the fourth trial because some sub-systems and software were not foolproof. The test was, in fact, conducted in a hurry even as all software designers had advised not to go for it,” the source informed.

During first test on March 12, 2013, the missile had swerved from path, prompting the defence authorities to destroy it mid air. Second test on October 17, 2014 was claimed successful by the DRDO though it could not maintain low height as intended.
The recurring failure has put the top DRDO scientists, who were pushing for the test despite shortcomings in the system, in a tight spot. While ITR authorities were tightlipped, Director General of DRDO Selvin Christopher, who witnessed the launch, did not respond queries from ‘The Express’.