Excise and Cooperation Minister Damodar Rout feels the cheer in the BJP camp in panchayat election will be short-lived.

In General Elections, results are based on ideology and performance of political parties,” he said, while addressing a meeting in Kansar under Tileibani zone 1 in Deogarh district on Saturday. 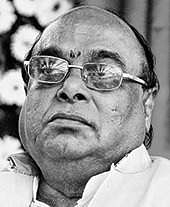 Rout said when ‘Modi Magic’ was sweeping the country, the BJD sent 20 MPs to  Parliament from the State. “This situation will be repeated in 2019 elections,” he said, adding that the cheer in the BJP camp will be short-lived as it can do little for development of villages.

Launching an attack on Dharmendra Pradhan, Rout dared the Union Minister to contest from the State and win the elections. He was also critical of the role played by Pradhan on the Mahanadi issue and said the livelihood of 3.5 lakh fishermen is at stake in Odisha because of the dispute.

On the achievements of Janata Dal government led by Biju Patnaik and BJD government of Naveen Patnaik, he said various schemes were launched in Odisha and other States are taking a cue from Odisha.  He also questioned the silence of  Prime Minister Narendra Modi on Mahanadi issue.

“The Inter-State River Water Distribution Act, 1956 called for intervention of the Prime Minister to settle the dispute but Modi is non-committal,” Rout said.