This missile has the capability to carry a payload of up to 1,000 kg but if the same was reduced by half, the striking range could be enhanced.

Defence sources said the indigenously built Prithvi-II missile, mounted on a Mobile Tatra transporter-erector Launcher (MTL), was fired from the launching complex-III (LC-III) of the Integrated Test Range (ITR) at Chandipur-on-sea at about 9.50 am. 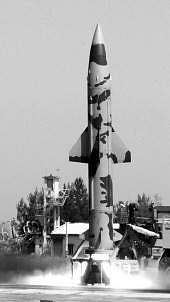 The test was conducted as part of user training exercise by the Strategic Forces Command (SFC) of Indian Army with logistic support from DRDO. The missile used for the test was picked randomly from the production lot.

‘’Carrying a dummy payload, the missile covered the desired striking range with close to zero circular error probability. It met all mission objectives successfully. All tracking systems, telemetry stations and radars tracked the path of the missile,’’ said an official. The sources said the nine metre tall and one metre thick missile developed by DRDO with a launch weight of 4.6 tonnes has a strike range upto 350 km. Powered by liquid propellant, Prithvi-II can operate with both liquid as well as solid fuel.

The missile has the capability to carry a payload upto 1,000 kg, but if the same is reduced by half, the striking range of the sleek missile could be enhanced.

Prithvi missile can be taken close to the forward line over any kind of terrain. It has been designed to deliver advanced conventional warheads deep into enemy territory. After reaching an altitude of nearly 30 km, the missile stops climbing and dives at the target at an 80 degree angle.

The missile packs sufficient punch to heavily damage forward airfields and destroy mechanised forces held back as reserves. Prithvi was first test-fired in 1988 and inducted into the armed forces in 2003. At present, nearly 30 missiles are manufactured each year for all versions of Prithvi.