Monkey flees with newborn in Odisha

Apprehending that the monkey may have gone inside the nearby forest, the Forest department formed five special teams each comprising 10 personnel.

CUTTACK: In a shocking incident, a 16-day-old baby was taken away by a monkey while he was sleeping with his parents in their house at Talabasta Puta Sahi village in Banki block of Cuttack district on Saturday morning.

Due to scorching heat, Rama Krishna Nayak and his wife Sarojini were sleeping with the baby boy inside a mosquito net on the verandah of their house on Friday night. Sarojini woke up early in the morning and went outside for morning ablutions. She had lifted a part of the mosquito net before leaving. While she returned at about 6 am, she saw a monkey taking her son away. As she ran towards the monkey to save her baby, the monkey jumped to the asbestos roof of the house and disappeared with the boy.

As Sarojini raised an alarm, her family members and villagers rushed to the spot and started searching for the monkey and the baby. 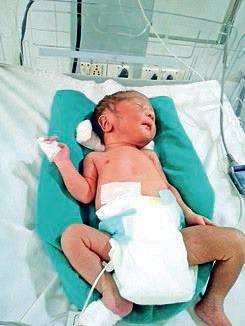 On being informed, Forest and Fire personnel reached the village and launched a search operation. Apprehending that the monkey may have gone inside the nearby forest, the Forest department formed five special teams each comprising 10 personnel. Though the teams searched the forest area of 4 km radius, neither the monkey nor the newborn baby was traced.

Sources said Sarojini had delivered her first child through caesarean section in 7th month of pregnancy. The premature child was undergoing treatment in the Special Newborn Care Unit (SNCU) of Sishu Bhawan and was discharged from the hospital on March 29. “Since the baby had a problem in crying, it created difficulty in tracing him,” said a Forest official.

Following the incident, 32-year-old Rama Krishna, a driver by profession, is in a shock while his wife was admitted to a local hospital as she fell unconscious.

Meanwhile, the local administration is planning to use sniffer dogs in search operation on Sunday. Several persons of the area have been injured in attack by monkeys in the last few months. The locals have expressed displeasure over inaction of the Forest Department despite repeated complaints in this regard.

More from Odisha.
Now we are on Telegram too. Follow us for updates
TAGS
Monkey Newborn Talabasta Puta Sahi village Cuttack district