With lightning emerging as a major natural disaster that claims over 400 lives every year, Odisha Government is strongly contemplating to install an early warning system to minimise the loss of human

BHUBANESWAR:With lightning emerging as a major natural disaster that claims over 400 lives every year, Odisha Government is strongly contemplating to install an early warning system to minimise the loss of human lives as well as property.

Such a system, he said, enables prediction of lightning strike about 45 minutes in advance and provides highly accurate forecast with precise location of the area. This would facilitate dissemination of early warning through mass messaging and mobile-based application to people living in the areas so that they take suitable precautionary measures.

Over the last few years, lightning has emerged as a major killer and accounts for more than 400 human lives every year. Compared to other natural calamities, lightning claims more lives in Odisha.
In 2017-18, as many as 456 persons were killed due to lightning which has recorded a 15 per cent increase over the previous year.

Special Relief Commissioner and Managing Director of OSDMA Bishnupada Sethi said the Government making all out efforts to minimise death toll through appropriate technological interventions apart from raising awareness among the people about disaster and preventive measures. 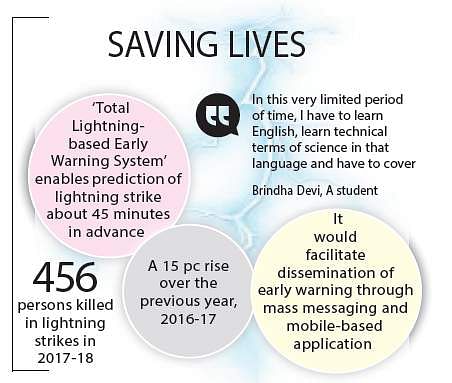