KENDRAPARA: Millions of baby turtles have perished after high tide washed away thousands of nests of the endangered Olive Ridleys at  Gahiramatha Marine Sanctuary in district.A record number of 6.46 lakh turtles laid eggs on Nasi-1 and Nasi-2 islands within Gahiramatha sanctuary from March 8 to 13. Last week, around 30 lakh baby turtles emerged from the pits and started their journey into the sea. The hatchlings emerge after 45 days of laying of eggs by the turtles. 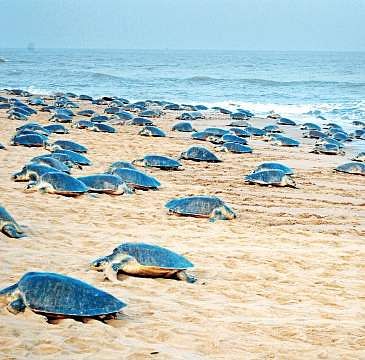 “We were expecting the birth of around four crore hatchlings in this month. But the  high tide during full moon  day on Monday wreaked havoc on the turtle nests. More than half of the total turtle nests were washed away by tidal waves,” said Forest Range Officer of Gahiramatha Marine Sanctuary Subrat Patra.
Beach erosion and untimely rain  are some of the other reasons for loss of turtle eggs. Now, the  beach is littered with millions of eggs shells  and carcasses of unborn hatchlings, he informed.

The high tide will not inundate the eggs if the angle of the beach is high or the nest is made at the far end. However, beach erosion at Gahiramatha has also led to loss of turtle eggs. The erosion has carved out small cliffs from the sand dunes which the nesting female turtles find it difficult to climb. This has led to more turtles laying eggs at the low end of the beach where the eggs are at a greater risk of exposure to the waves and accidental interference, Patra said.

“We were happy when more than half a million turtles laid eggs at Gahiramatha by breaking a 17-year long record two month back. But with high tide creating hurdles for the turtles, eggs in the remaining nests are not likely to hatch as these are submerged under seawater,” said Hemant Rout, a noted environmentalist and president of Marine Turtles and Mangrove Conservation Society (MTMCS), Kendrapada.

Mortality rate of baby turtles in sea is high. Out of 1000 baby turtles, only one survives to become an adult. After reaching about 20 years of age, the turtle come back to the same beach where they were born for mating and laying eggs, Rout added.

● A record number of 6.46 lakh turtles laid eggs on Nasi-1 and Nasi-2 islands within the sanctuary from March 8 to 13. Last week, around 30 lakh baby turtles emerged from the pits and started their journey into sea

Now we are on Telegram too. Follow us for updates
TAGS
Olive Ridley turtles