Flight operations from Jharsuguda Airport, which received DGCA licence on Friday, will commence from June 14.

BHUBANESWAR: Flight operations from Jharsuguda Airport, which received DGCA licence on Friday, will commence from June 14. Air Odisha, which bagged the bid, will operate flights from Jharsuguda to Bhubaneswar, Ranchi and Raipur thereby meeting the long-standing demands for air-connectivity to the Western Odisha region.

Director, Biju Patnaik International Airport, Suresh Chandra Hota told The Express that Air Odisha had successfully bid for conducting operations at Jharsuguda airport. An Air Odisha spokesperson said, the airline will use a 21-seater dual-engine Beechcraft aircraft (1900D) to operate from Jharsuguda to the three destinations under the regional connectivity scheme.

The 21-seater aircraft will operate with two pilots, one cabin crew and can carry 18 passengers. “We received Jharsuguda Airport’s commercial operations licence on May 4. We are taking a month’s time before starting the operations for marketing purposes,” he added.Air Odisha will operate one flight each daily from Jharsuguda to Bhubaneswar, Raipur and Ranchi. The flights from Bhubaneswar will proceed towards Raipur via Jharsuguda. Similarly, flights from Bhubaneswar will proceed towards Ranchi via Jharsuguda.

The airlines will approximately charge `1,800 to `2,000 under UDAN (Ude Desh ka Aam Naagrik) Scheme towards airfare from Jharsuguda to Bhubaneswar and vice-versa. The airlines will offer 50 per cent seats at low fare under the UDAN scheme and the charges for remaining seats will be based on the market price.

The Airports Authority of India (AAI) recently gave a month’s time to Air Odisha and Air Deccan for starting operations on routes bagged by them in the first round of bidding under UDAN, the regional air connectivity scheme, which aims to connect unserved and under-served airports as well as make flying more affordable for passengers.

Jharsuguda airport has been dubbed as an unserved airport. Unserved refers to an airport that has no scheduled airline service and the particular airport should have at least some services whereas, un-derserved airport does not have enough airline services either because of inadequate capacity and destinations, or both.

Jharsuguda is one of the five airports in Odisha selected to provide regional flight connectivity under Centre’s flagship UDAN scheme, which also includes BPIA.The other airports are Utkela (Kalahandi), Jeypore (Koraput) and Rourkela (Sundargarh) are also likely to be given clearances by the Civil Aviation Ministry soon.Jharsuguda is the second airport to have received the DGCA licence after Biju Patnaik International Airport at Bhubaneswar. 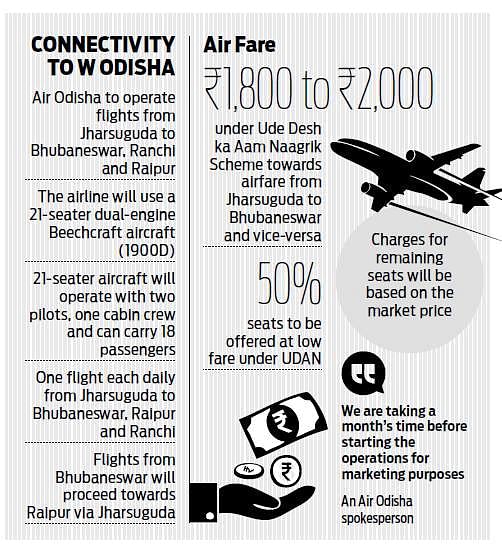