The State Government has decided to provide loans to landless farmers through the joint liability group at one per cent interest rate.

BHUBANESWAR: The State Government has decided to provide loans to landless farmers through the joint liability group at one per cent interest rate. Announcing this here on Friday at a media conference, Cooperation Minister Surya Narayan Patro said each joint liability group will comprise five farmers. The group will be provided a loan of Rs 50,000, he said and added that small farmers having their own land will be given loan in proportion to the area of the land. “Each cooperative society will have to provide loan to at least 10 groups,” he said. 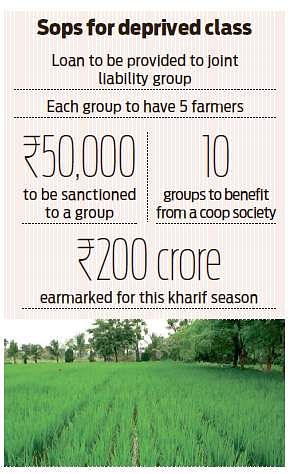 Loan to the landless farmers will be provided during the kharif season this year, Patro said and added that the Chief Minister has directed the Cooperation department to disburse Rs 7200 crore of loans to farmers out of which Rs 200 crore has been earmarked for the landless farmers through the joint liability groups. Besides, Rs 1000 crore will be provided as term loan in the agriculture sector, he said.

Chief Minister Naveen Patnaik on Friday reviewed the performance of Cooperation department which has disbursed crop loan of Rs 19099.06 crore at one per cent interest rate to 69,40,466 farmers and Rs 20034.88 crore at two per cent interest to 1,24,51,458 farmers during the last four years. Agriculture loan upto Rs 50,000 has one per cent rate while loan above Rs 50,000 attracts two per cent interest rate. Besides, the State Government has provided interest subsidy of Rs 1466.79 crore during the same period.
The Minister said drafting of a comprehensive warehousing Act is currently going on and will be completed soon.

Now we are on Telegram too. Follow us for updates
TAGS
loans farmers State Government