RAYAGADA: The hope of second Kendriya Vidyalaya in the district, which has been hanging fire for the last five years, was rekindled last year when Union Petroleum Minister Dharmendra Pradhan announced at the inauguration of MITS mega food park at Kolnara that the new school at Gunupur will start from next academic year. Human Resources Development Ministry has been asked to take necessary steps in this regard, he claimed. But a recent letter of Kendriya Vidyalaya Sangathan (KVS) to the Collector stating that it will consider the proposal only after getting the sanction of the Central Government has thrown water on the expectation of the local people.

After the Regional Kendriya Vidyalaya office at Bhubaneswar agreed to open the school in Gunupur six years back, a team of officials of KVS (Bhubaneswar Region) led by Assistant Commissioner GSN Reddy visited Gunupur in 2012 to locate a suitable place where the school can function till its permanent building is constructed. The team expressed its satisfaction with the facilities available at old block office and agreed to submit their report to the KVS recommending to open the school from 2013 session.

The local administration agreed to hand over the building with 10 rooms and provide eight acres of land for permanent building of KVS. Even a flex board of KVS was fixed on the wall of the block office and application forms were issued for admission.But the guidelines for KVS were changed in 2014. As per the revised norms, the temporary school building should have at least 20 rooms while 10 acre of land was required for the permanent building.

Accordingly, the district administration earmarked the land behind Sub-Collector’s office in Marathiguda for permanent building in 2014. For temporary school, Bell Hostel having 20 rooms was earmarked. On the direction of KVS regional office, former Principal of Rayagada Kendriya Vidyalaya Seeta Rameya Meda visited the temporary building in July 2015 and submitted a positive report to the authorities.

Following the Union Minister’s assurance, the local administration spent ` eight lakh towards renovation of the temporary building and procuring furniture. Meanwhile, regional office of KVS wrote to Rayagada Collector stating that the proposal for opening new KVS at Gunupur will be considered only after getting due sanction of Government of India.

Collector Guha Poonam Tapas Kumar said, “The rejection of the proposal for second Kendriya Vidyalaya by KVS has come as a big disappointment to the people of Gunupur. All modalities including lease of land, accommodation, furniture and power supply have been completed as per requirement. However, efforts are being made to request KVS to reconsider their decision.” 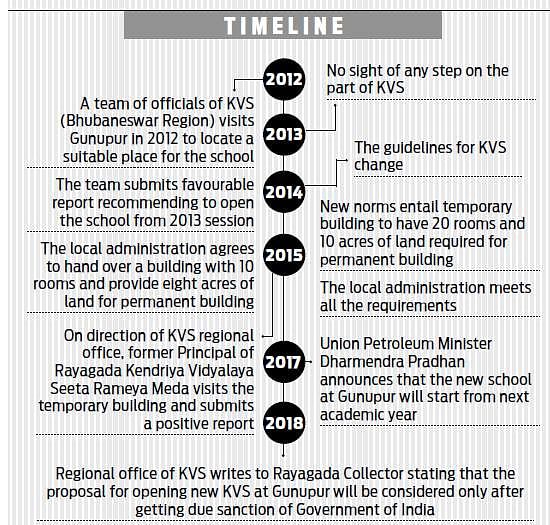