Though there has been steady progress in rate of toilet construction, Odisha remains at the bottom of cleanliness list in the country.

BHUBANESWAR: With around 45 per cent of the households not having toilets, the State Government is far from meeting its sanitation target by October 2019, when the country will celebrate the 125th birth anniversary of Mahatma Gandhi.

Though the State has made a steady progress in toilet construction under Swachh Bharat Mission (SBM) from 10.58 per cent in October 2014 to 54.89 per cent till date, it is at the bottom of cleanliness list at the national level. Only Deogarh and Jharsuguda districts have been declared open defecation free (ODF).
A districtwise review of the sanitation drive by Chief Secretary AP Padhi and Union Secretary in the Ministry of Drinking Water and Sanitation Parameswaran Iyer revealed that 45,03,128 out of 82,03,733 households of the State have toilets.

“We have made substantial progress in comparison to October, 2014 when we started the campaign. As of now, two districts have been declared ODF. Another four districts will achieve the ODF status by end of July,” Padhi told reporters.

“Around 3,700 villages have reached the saturation point. Verification is going on and they will be declared ODF within a month,” he added.Geo tagging of the toilets have also picked up significantly. Around 73 per cent of the toilets completed so far have been verified and geo-tagged. The Chief Secretary said target has been set to cover the remaining households under SMB by end of December. “Odisha has gathered momentum in the mission and it is right time to push it ahead with more speed,” Iyer said.

Principal Secretary, Panchayati Raj DK Singh said sufficient funds are available with the district for the programme and Collectors are being extended required administrative and technical support to achieve the target.

Over 14,000 Swechhagrahis have been engaged at village level and around one lakh para-government workers are working in the field for promoting safe sanitation practices and use of toilets, Singh said. 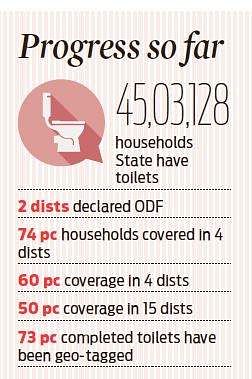 Now we are on Telegram too. Follow us for updates
TAGS
Mahatma Gandhi Odisha