Though harvesting period was started in April third week, it fails to pick up pace

JEYPORE: Despite an expected record rabi paddy crop this season, farmers are spending sleepless nights. Reason: acute shortage of labourers. Less number of working hands has delayed the harvesting of the paddy crops. Though harvesting period was started in April third week, it has failed to pick up pace.
As per reports, farmers, particularly those cultivating paddy in Jeypore sub-division, have been facing hardship in hiring the labourers to do the farm work in time for the past few years.

With a flood of Government schemes in the tribal villages, subsidised food and other facilities, the labourers seem to have spurned the arduous farm work and prefer other jobs in around 60 per cent of the area. According to an estimate, 40,000 farmhands are required per day during rabi  harvesting season from April third week to June first week. But the figure of available labour has been steadily dwindling during the period.

Earlier, while the small and marginal farmers managed to do their farm works with local labourers, now they have to hire them from outside. In such case also, they have to wait for several weeks to get required number of labourers. Taking advantage of the situation, some labourers are demanding daily wages which are more than developed States like Punjab and Haryana. “Besides giving `250 wage per day, chicken and liquor, we are forced to arrange vehicles for carrying the labourers to crop fields”, said J Ramesh, a farmer of Jagannathpur.

“We are worried, as the number of working hands this season is meagre. The crisis has already shot up the wages. If more number of labourers don’t arrive soon, it will be difficult for the standing crop to reach markets in time”, he added.

As the Government does not seem to be willing to set any norms for farm labour wages or come up with any scheme to provide machines to replace the physical labour, the farmers have started switching to other professions. According to reports, around 5,000 farmers give up cultivation or give their land on lease every year. “I sold all my land due to labour problem only,” said Susant Panda, a farmer of Ekamba village.

However, the agriculture department officials stressed on more use of farm equipment in cultivation to reduce physical labour. The advanced farm equipment can only solve the labour problem in the State, said a senior district agriculture officer. 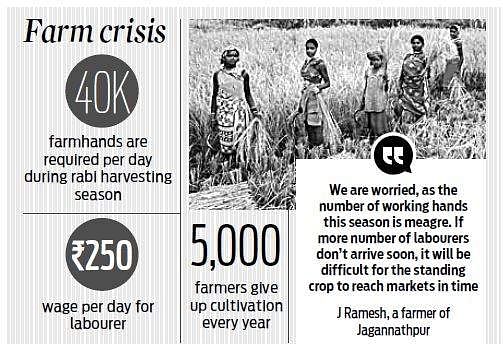