BHUBANESWAR:THE State Government on Wednesday asked district collectors to remain prepared for possible flood in their areas and stock adequate food grains in inaccessible areas.The instruction was issued by Special Relief Commissioner (SRC) Bishnupada Sethi at a high level meeting held on Tuesday to review flood preparedness ahead of the onset of monsoon. The district authorities have been asked to furnish their updated District Disaster Management Plan (DDMP) by June 10 for approval by the State Disaster Management Authority. After approval, the updated plans will be uploaded on the website of the respective districts.

During the meeting, Additional District Magistrate (ADM) and District Emergency Officer (DEO) informed that the flood prone inaccessible areas which are likely to be cut off in the event of flood have been identified for stocking of PDS commodities for the next 2 to 3 months so that those are available in the villages during the entire rainy season. “The collectors would ensure this (stocking of food grains) before the onset of monsoon and furnish information regarding the quantity of food grains stored at different points,” Sethi said.

The districts will also take steps to make pre-contract with the traders following due procedure for supply of dry food like ‘chuda’, ‘gur’ and other essential commodities, if required. The officials were asked to complete the exercise soon and report the arrangement to the office of the SRC.Districts were advised to identify the required number of flood shelters in vulnerable areas for accommodation of the people. Arrangements of water, food and lighting should be made for the people taking shelter, the SRC said and added that additional sanitation arrangement is also required to be made where ever necessary. The SRC asked the districts to send a compliance report along with the number of shelters identified by June 10. A mock drill on cyclone and flood management will be held on June 19 in all the districts.

The State has 301 power boats with the State Port Engineering Organisation under the SRC and those are available in the districts. Test run of the boats is going on in different districts, he said adding that the State Port Engineer has been directed to complete the test-run of the boats by June second week.
The ADMs/ DEOs were also directed to complete the process of engagement of temporary staff as per sanction communicated to them by  May 31. All the districts will furnish information about availability of private boats along with contact number of boat owner to the office of SRC by June 10. Besides, the information will be uploaded in the official website of the district concerned, he said.

The SRC said as many as 108 vulnerable points have been identified in different rivers and saline embankments out of which three are found to be critical vulnerable points. “It has been decided to store required flood fighting materials at these critical vulnerable points and arrange patrolling during flood,” he said and added that it was assessed that 33.35 lakh gunny bags, 19430 bullahs (wood sticks), 15,125 sq metre of  bamboo mats and 10,320 bamboos among other materials would be required to be stored by June 1 at strategic locations. 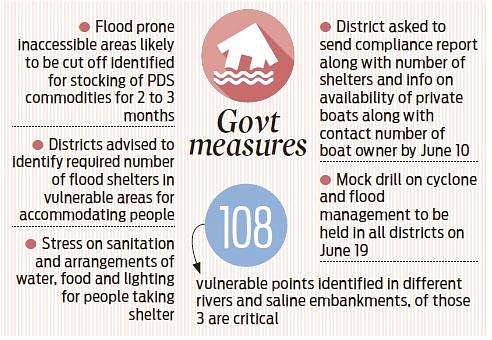