The issue was raised during a recent review of the progress achieved in the establishment of Agro Services Centres in the State.

BHUBANESWAR:  Even as the State Government has been presenting a separate Agriculture Budget since 2013 giving priority to farming and allied sectors, its decision to set up 40 Agri Clinics has not been materialised even after more than three years. The State Government had sanctioned Rs three crore in 2014-15 for establishment of Agri Clinics in 40 identified Primary Agriculture Cooperative Societies (PACS) and Large Area Multi-purpose Cooperative Societies (LAMPS). The funds sanctioned to the Cooperation department was kept idle in the Odisha State Cooperative Bank (OSCB) for three years.

The amount was transferred to the Agricultural Promotion and Investment Corporation of Odisha Limited (APICOL), a State Government undertaking, last month after a meeting chaired by Cooperation Secretary Ranjana Chopra decided that the project will be implemented by the corporation. 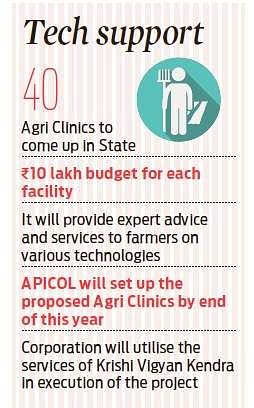 Agri Clinics are envisaged to provide expert advice and services to farmers on various technologies including soil health, cropping practices, plant protection, crop insurance, post-harvest technology and clinical services for animals, feed and fodder management, prices of various crops in the market which would enhance productivity of crops/animals and ensure increased income to farmers.

The issue was raised during a recent review of the progress achieved in the establishment of Agro Services Centres in the State. Expressing her displeasure over the inordinate delay in grounding of the project, Chopra directed APICOL to set up the proposed Agri Clinics by end of this year. She also suggested the corporation to utilise the services of Krishi Vigyan Kendra (KBK) in the execution of the project.

The list of services to be provided by PACS/LAMPS will be suggested by APICOL basing on the requirements of the primary societies. Each of the Agri Clinic is estimated to cost `10 lakh out of which the State Government contribution is Rs 7.5 lakh while the remaining Rs 2.5 lakh will be shared by the PACS/LAMPS concerned.