Of 2.5 lakh people in areas under direct impact of Titli, around 90 per cent have already been shifted to multipurpose cyclone shelters and school buildings.

BERHAMPUR: With cyclones Phailin and Hudhud still fresh in minds, Ganjam district is bracing up for very severe cyclonic storm Titli which is set to make landfall in the district early on Thursday.
Even as the district administration has geared itself to tackle the natural calamity, panic has gripped people of Chikiti, Rangeilunda, Chhatrapur, Ganjam and Khallikote as they are likely to be the worst affected by the cyclone. The district administration has started evacuating people from the five coastal blocks, including Berhampur. 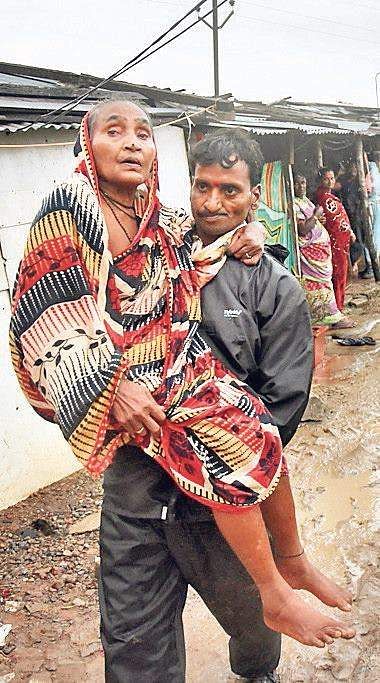 Of 2.5 lakh people in areas under direct impact of Titli, around 90 per cent have already been shifted to multipurpose cyclone shelters and school buildings. If necessary, private buildings will be used for accommodation. Arrangements have been made to provide cooked food to them.Doctors have been deployed at all cyclone shelters and steps have been taken to shift pregnant women and ailing persons to hospitals. Block officials are present at the shelters and monitoring the situation, Collector Vijay Amruta Kulange said.

“There is no need to panic. No one will be left out in the vulnerable areas. If necessary, reluctant people will be forcefully brought to the shelters for their safety”, he asserted.Police, fire fighters and ODRAF have already been deployed at various places. Three teams from NDRF are expected to arrive soon, he added.

The people of the five blocks had faced the full fury of the previous cyclones. Even though the gale force is likely to be less than the predecessors, people are fearful of the cyclone-induced high tide. Most of the people in the seaside villages now have pucca houses but in the event of high tide, there will be severe loss of property, said Gopabandhu Behera of Haripur village under Rangeilunda block.During Phailin, which packed wind speed of more than 230 kmph, sea water entered most of the coastal villages. “Though wind speed is expected to be much less this time, we are more concerned about rise in sea water level,” E Erreyya of seaside Revkoturu village said.

The residents of slum areas in Berhampur too are a worried lot. Despite provision of cyclone shelter and cooked food by Berhampur Municipal Corporation (BeMC), they are in a state of panic. Santoshini Mohanty of Aska Road recalling her past experience during Phailin, said, “the administration will save my life, but who will protect my hut which I had constructed after five years of hard work.”Many slum dwellers in the city also echoed similar views. They said before and after Phailin, BeMC had taken up various housing schemes to accommodate all the slum dwellers in pucca houses. But hardly 20 per cent of slum dwellers have been given pucca houses.

Refuting their claim, BeMC Commissioner Chakraborty Singh Rathore said most of the houses under different schemes are in the final stage of construction and would be provided to the slum dwellers soon. “Our main concern now is to protect citizens from the impending calamity,” Rathore said.