A tough fight is on the cards in Rengali Assembly constituency with BJD’s Reena Tanti, a political greenhorn, all set to take on BJP’s Nauri Nayak in the election.

SAMBALPUR: A tough fight is on the cards in Rengali Assembly constituency with BJD’s Reena Tanti, a political greenhorn, all set to take on BJP’s Nauri Nayak in the election.
Nauri was defeated by BJD’s Ramesh Patua, the incumbent Rengali MLA, by a slender margin of 1,830 votes in the 2014 polls. The BJD has, this time, denied ticket to Ramesh and reposed confidence in Reena, a homemaker. An engineering graduate, Reena is married to Motilal Tanti, a popular social worker of Parmanpur in Maneswar block. 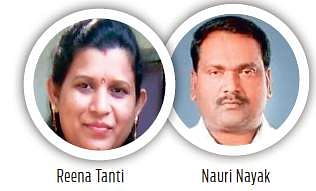 Sources said it will be a herculean task for the ruling party to retain the seat as Nauri has gone all out to win election this time. Congress  has fielded Balakrushna Rohidas, who also is a political debutant, from Rengali which is a reserved seat.
In the last polls, Ramesh secured 47,210 votes and Nauri managed to get 45, 380 votes while Duryodhan Gardia of Congress came a distant third with 31,335 votes. In 2009 elections, Gardia had won from the seat by defeating Independent candidate MB Pyariraj by 13,784 votes.

Reena has the advantage as she enjoys the support of Naba Kishrore Das who quit the Congress and bagged the BJD ticket to contest the polls from Jharsuguda, an adjoining seat to Rengali. Naba, the sitting Jharsuguda MLA, has a strong influence over the segment. Nauri too is expected to perform well this time. He is known for his good relations with the public and is well connected with the grassroots.  Balakrushna of Congress, who is a new face for the voters, has no visible support base in the constituency.  Political pundits say Rengali will witness a close fight between BJD and BJP.