SAMBALPUR: The jurisdiction of Sambalpur Development Authority (SDA) has expanded over the years but there has not been any change in the staff strength, leaving the agency handicapped.The crunch in SDA has been persisting for over five years, hitting town planning, development and beautification work.

Formed in 1995, jurisdiction of the authority has expanded vastly in the last 24 years. Apart from the 98 villages of Dhankauda, Rengali and Maneswar blocks located adjacent to the city, 37 more villages of Rengali, Jujumura, Maneswar and Dhankauda blocks have come under the purview of SDA. But, there has been no proportionate rise in the staff strength. Against the required strength of 32, the authority now has only 13 staff to look after the day-to-day affairs.

As per sources in SDA, planning department of SDA has five vacancies followed by the engineering department which has three posts lying vacant.The crunch is hampering development works of the city. Approvals of hundreds of housing plans are pending, said sources.

Moreover, the authority does not have a permanent secretary whose responsibility is to ensure execution of most of the works. Until last year, the SDA, which has been managing its affairs by giving secretary post charge to officials of other departments, appointed a permanent one. However, the newly appointed secretary is yet to join the post and in his absence, payment of salary to the staff has been getting delayed.
Evidently, three years back, all the vacancies were filled up with staff outsourced from government departments and private agencies. However, six of them were removed after the SDA authorities were assured that permanent staff will be appointed to tide over the crisis.

While the body is struggling to cope with the staff shortage, higher officials of SDA have proposed that there is also a need to increase staff strength to 55 from 32 to manage the larger area of jurisdiction.
Presently, the SDA office is operating from a small building at Saliabagicha in the city. As per sources, the SDA will shift to the new building being constructed on the bank of river Mahanadi at Durgapali area of the city. Started in November 2017, the project is likely to be completed by this year end and will also house the Sambalpur Municipal Corporation. 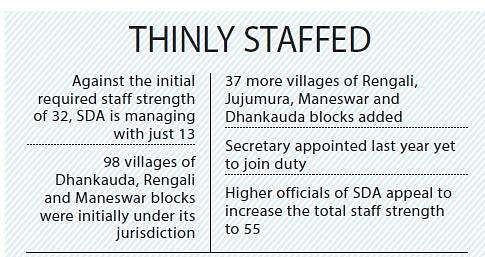 Now we are on Telegram too. Follow us for updates
TAGS
staff shortage Sambalpur Development Authority