In its bid to woo women voters, the BJD promised to provide Rs 5,000 crore Government business to the women SHGs which will provide a profit of about Rs 500 crore.

BHUBANESWAR: Asserting that all promises made to the people in 2014 have been fulfilled, Chief Minister and BJD supremo Naveen Patnaik on Tuesday released his party’s poll manifesto for the 2019 polls with emphasis on the socio-economic development of farmers, women, youths and other sections.
The manifesto named as “Naveen Odisha, Sashakt Odisha” (New Odisha, Strong Odisha) promises that KALIA scheme will continue for all farmers and landless agricultural labourers.

“The BJD, unlike the BJP and the Congress, has fulfilled its promises it had made to the people in the 2014 elections,” Naveen said. The next BJD Government will set up KALIA Commission to monitor the implementation of the scheme and recommend revision of rates after three years, address issues of distressed farmers and other incentives for their welfare, the manifesto said and added that enhancement of minimum support price (MSP) of paddy to Rs 2930 per quintal will be pursued with the Centre.

Stating that apart from existing investment, an additional Rs 50,000 crore will be invested for increasing the area under irrigation, the manifesto said there will be KALIA centres to encourage agri-innovation and serve as one-stop resource centre in every district.

The manifesto promised reservation of 75 per cent jobs in all upcoming industries for qualified local youth. Besides, all technical institutes, colleges and universities will be provided free wi-fi and all students will be given one GB free internet after joining college. Besides, education loans will be provided at zero per cent interest rate and there will be scholarship council to facilitate scholarships both on merit and socio-economic criteria.

In its bid to woo women voters, the BJD promised to provide Rs 5,000 crore Government business to the women SHGs which will provide a profit of about Rs 500 crore. Besides, the party also announced interest-free loans to women SHGs upto Rs 5 lakh.

The BJD announced provision of marriage assistance of Rs 25,000 for daughters of poor families. Stating that girl child education will be free from KG to PG level, the manifesto said not a single widow, destitute will be left out of social security cover.

Stating that all land/house given by the Government will be in the name of women of the household, the manifesto promised to set up Mission Shakti bazaar in each panchayat and training programme for members for business development and equipment support. Besides, special ‘Ama Gaon Ama Bikash’ programme will be held in each block exclusively for women, it said.

The BJD also promised that Biju Express Way will connect North to South and East to West of Odisha. The heritage Silver City of Cuttack will also be connected to Smart City Bhubaneswar by metro railway.
The ruling BJD promised to launch a special initiative called JUHAR (Joint Upliftment of Habitations and Regions) to reduce regional disparities. “To reduce regional disparities and fast pace development, we will have Special Development Councils in Bargarh, Balangir, Boudh, Deogarh, Jharsuguda, Kalahandi, Sambalpur districts and Athmallik, Kuchinda and Nilagiri Sub-Divisions,” the manifesto said. 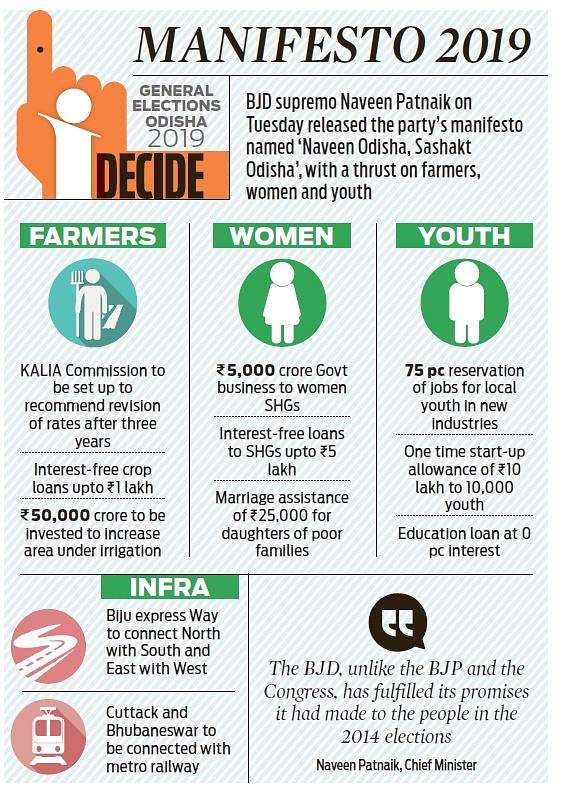