The second phase of General Elections in Sundargarh, Bargarh, Balangir, Aska and Kandhamal Lok Sabha constituencies and 35 Assembly segments were largely peaceful though technical glitches in EVM machines and stray incidents of violence were reported in some parts.

Even as people including enthusiastic first time voters and senior citizens turned up in large numbers to vote, EVM snags delayed polling in many booths under Sundargarh Lok Sabha constituency, which reported 54.5 per cent (pc) polling till 5 pm. Despite the cloudy weather providing relief, the turn out was not on the higher side. The prestigious Sundargarh Lok  Sabha constituency has over 15 lakh voters. Polling was conducted across 1,846 booths. 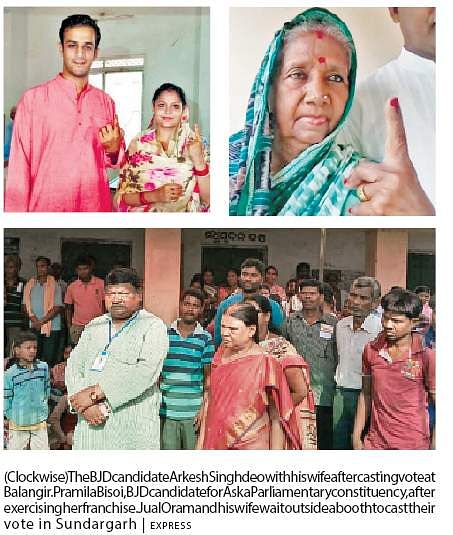 Sundargarh Collector and District Election Officer Rashmita Panda said minor snags in EVMs were noticed at some places which lasted for 25 to 40 minutes and technical teams either repaired or replaced those EVMs for smooth conduct of elections.

Rain shadow on polling
Voting started late in some parts of Balangir Lok Sabha constituency, which saw 55 pc voter turnout till 6 pm, due to malfunctioning of EVMs. EVMs developed snags at two booths in  Loisingha, one in Agalpur, one in Tureikela and a couple more in Balangir. In fact in some places, voting started an hour late due to snags in the machines.

While the voter turnout was more in the morning throughout Balangir district which has five Assembly segments under it, it reduced in the noon due to rain and thunderstorm.No untoward incident was reported from any of the 190 sensitive booths. Maoists had earlier urged locals in Khaprakhol block to boycott voting. In Khariar and Nuapada Assembly segments, polling was peaceful.

BJP candidate in soup
Around 53.8 pc polling was recorded till 5 pm in Aska Parliamentary constituency. While EVM  snags were reported in many parts of the seven Assembly segments under the constituency, an  EVM machine was ransacked in booth 182 allegedly by BJP candidate Nilamani Bisoi.The booth is located in Renti village under Soroda Assembly segment. Bisoi entered the booth and allegedly broke the control unit of the EVM. He has been detained.

In Aska Assembly segment, defunct EVMs delayed voting in booth 158 of Aska Tota Sahi, 71 in  Niral village and booth 155 in Khambeswari Patana. Polling was delayed by 15 minutes in these  three booths.Voter turnout was low in the morning and started late by 10 to 15 minutes due to EVM snags but voting gained pace as the day progressed.

Polling peaceful in Maoist affected areas
Polling was peaceful in Maoist-affected pockets of Kandhamal Lok Sabha constituency including Barahala and Mingunpadar villages where the Naxals had killed a woman polling supervisor and set a vehicle carrying election officials on fire on Wednesday.In three booths under Phulbani Municipality, voting started an hour late because of snags in EVMs and by 5 pm, the voter turnout in Balliguda was 52.02 pc besides, 63 pc in G Udaygiri and 59 pc at Phulbani. In booth 114 in Ward 2 of Phulbani, polling continued till 8 pm.

Tension prevailed in booth 98 - a model booth - as there was a mismatch in number of voters in voters list and number of votes polled. In Bhanjanagar Assembly segment, 53.5 pc voter turnout was recorded till 5 pm but polling continued till 8.30 pm here.

Naveen’s fate locked
In Bijepur Assembly segment under Bargarh Lok Sabha constituency, the fate of Chief Minister Naveen Patnaik has been sealed in the EVMs. Polling in Bargarh district and the entire constituency was peaceful. Voting was held amid tight security in 217 sensitive and highly sensitive booths of the total 1,378 booths. The total number of voters in the district is around 11,60,595 and polling percentage was 60.58 pc by 5 pm. Jharsuguda and Brajrajnagar Assembly segment reported 79 and 78 polling percentage respectively.

Now we are on Telegram too. Follow us for updates
TAGS
Lok Sabha elections 2019