Coconut production to be ramped up in Jagatsinghpur

JAGATSINGHPUR:  Notwithstanding huge loss to coconut plantation due to pest attack and cyclone Fani, the district administration has come up with a plan to increase its production to ensure socio-economic development of women self-help groups. The administration has planned to distribute 60,000 coconut seedlings among local women self-help groups across the district.

After the super cyclone of 1999, coconut yield had dwindled alarmingly with diseases taking a heavy toll on the cash-yielding nut, forcing growers to resort to distress sale. Hundreds of coconut trees had been severely affected by the eriophyid mite and farmers had to face heavy losses.   Besides, frequent cyclones have taken a toll on coconut plantation forcing several farmers to give up its cultivation. 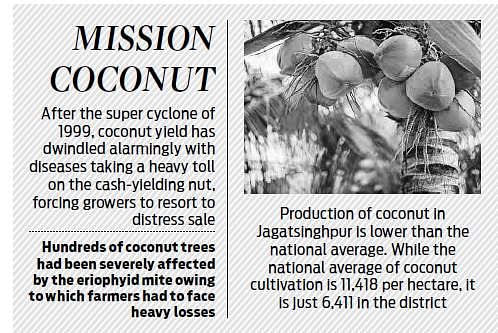 Keeping this in view, the administration has taken an initiative to promote coconut cultivation in the district. On Friday, district level workshops on scientific cultivation technology of coconut and value addition were conducted which saw the participation of several self-help groups and coconut growers.

During discussions, it was revealed that the production of coconut in Jagatsinghpur district is lower than the national average. While the national average of coconut cultivation is 11,418 per hectare, it is just 6,411 in the district.   Professor of Orissa University of Agriculture and Technology (OUAT) Sarat Chandra Sahoo said a coconut tree keeps yielding fruit up to 70 years. He said no steps were taken by coconut growers to ensure that the trees are taken care of. Prof Sahoo stressed the need for adopting modern techniques, development schemes and value addition to ensure production is ramped up in the district.

Jagatsinghpur Collector Sangram Keshari Mohapatra said coconuts from Jagatsinghpur are sold across the State and now steps will be taken to sell it under the district brand. He appealed to NABARD to provide financial assistance to women SHGs and other growers to boost coconut production in the district.

More from Odisha.
Now we are on Telegram too. Follow us for updates
TAGS
coconut plantation Jagatsinghpur 60000 coconut seedlings Orissa University of Agriculture and Technology