The state government has decided to move the Sundargarh district administration against SER for partially stalling a four-lane project of Public Works Department.

ROURKELA: South Eastern Railway (SER), which has been running against time and pursing the Sundargarh district administration for removal of encroachment for Jharsuguda-Rourkela third railway line project on Howrah-Mumbai main line, has run into a hurdle.

The BJD, in a seemingly tit-for-tat act, has decided to move the district administration against SER for partially stalling a four-lane project of Public Works Department (PWD) and also not allowing welfare projects or activities in its territorial jurisdiction.

More than a year back, SER had put a spanner on the Rs 13 crore four-lane project of the PWD between BSNL Office and Basanti Colony which partially runs through Railway Colony and connects the newly-constructed northern entrance of Rourkela railway station.

PWD sources said after a meeting with Rourkela city administration, SER had agreed to the construction of the four-lane road of about four km. But midway through the project, SER came up with a plea to limit the middle portion of 1,200 metre to a two-lane of 30 feet.

Rourkela MLA and former Minister Sarada Prasad Nayak said in order to allow four-laning of the 1,200 metre stretch, SER sought Rs 103 crore as land premium and Rs 7 crore for damage to railway property. He said even as the State Government agreed to pay the compensation, SER claimed the four-lane was of no benefit to it. Nayak said the four-lane is now in a state of disarray.

He said it was envisaged to allow direct access to more than four lakh people residing in the captive township of Rourkela Steel Plant and Rourkela Municipal Corporation limits to the northern entrance of the city’s railway station.

Nayak said SER, by sidestepping Central guidelines, is not allowing the State Government to take up rehabilitation of slums or provide basic amenities to slum dwellers on railway land.

He said about 400 acre SER land is encroached. Nayak  demanded that those evicted for the third line should be rehabilitated on 20 acre of unused railway land, adding that SER should also fulfil its commitment to allow development in the circulating areas.

A few days back, Sundargarh Collector Nikhil Pavan Kalyan had convened a meeting over the issue of removing encroachment for SER’s project. It was revealed that except for a stretch of about five km between Panposh and Malgodam here, the third line project worth Rs 765 crore is progressing well. 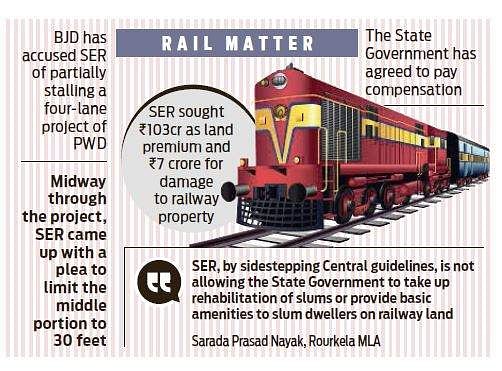