Probe by district administrations found that no case was related to crop loss or financial burden, says Agriculture Minister.

BHUBANESWAR: The state government on Wednesday said 38 farmers have committed suicide in the last three financial years upto March 2019 but none of the cases was linked to crop loss or loan burden.

These allegations were probed by respective district administrations but none of them was due to financial burden and crop loss,” said Agriculture and Farmers’ Empowerment Minister Arun Sahu in a written reply to the Assembly. 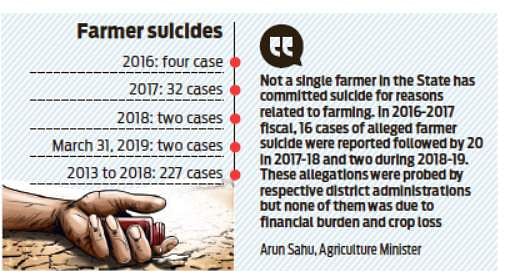 Padma Muduli, wife of Madhaba Muduli of Amulliguma village under Tentulikhunti block of Nabarangpur district is the lone woman farmer who allegedly committed suicide on September 8, 2018. Attributing her death to family dispute, the Minister said, “The cause of alleged suicide will be confirmed after police investigation.”

The plight of Hadu Bagarti, one of 16 farmers who committed in 2017, hit national headlines when his family claimed that he took the extreme step after failing to save his crops because the lift irrigation points remained inoperative of lack of power supply.

“The cause of suicide attributed to crop loss due to power fluctuation is misleading. It may be due to any other reason as per the inquiry report,” the Minister said in response to a question from Suresh Kumar Routray of Congress.

As the issue rocked the Assembly, the former Agriculture Minister Pradip Maharathi informed the House that the Bargarh farmer might have taken the extreme step due to internal problems in his family.

Bagarti had a quarrel with his wife over sprinkling pesticide in the field following which he consumed pesticide, Maharathi had stated and dismissed Opposition allegation that the farmer committed suicide due to crop loss and loan burden.

The report submitted by the Minister stated that the highest number of suicides by farmers was from Bargarh district in 2017-18.

Of the 20 cases of farmers suicide reported during this fiscal, seven were from Bargarh followed by four in Ganjam, three from Nuapada and two in Sambalpur.

To a similar question in November last year, the state government had informed the Assembly that 227 farmer suicide cases were reported in the state between 2013-14 and 2017-18. But, none of them was due to loan burden.