A study has found that around 54 per cent (pc) households surveyed in Western Odisha have been eating fewer meals during coronavirus lockdown.

BHUBANESWAR:  A study has found that around 54 per cent (pc) households surveyed in Western Odisha have been eating fewer meals during coronavirus lockdown. These households reduced the quantity of food ever since the lockdown was imposed as part of immediate adjustment for food security. 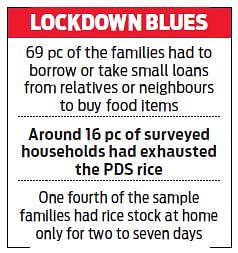 The study, by Odisha Khadya Adhikar Abhijan, was conducted in 10 migration-prone blocks of Bargarh, Balangir, Kalahandi and Nuapada districts. Held between July 1 and 15, it revealed that two third respondents, around 69 pc of the families, had to borrow or take small loans from relatives or neighbours to buy food items during lockdown.

Around 13 pc families said they had to go hungry for one or more days due to unavailability of food at home, while around 16 pc of surveyed households had exhausted the PDS rice. The survey also found that one fourth of the sample families had rice stock at home only for two to seven days, while two third of the families were left with no money to buy rice or food item.

“At least 57 pc of families reported that they are worries that they might not have enough food to eat due to depleting food resources in the household and non-availability of cash at hand,” the survey report stated.
Exclusion of family members from PDS beneficiaries list was also a concern for some of the poor households.

There were approximately 10 pc families where one or more members have been excluded from the scheme either due to non-availability or non-seeding of Aadhaar and deprived of the 5 kg rice they were entitled under the food security scheme.

While most of the respondents were working as daily wagers, around 40 pc were dependent on agriculture and 11 pc on their pension or PDS for the survival. The forum has recommended the State Government to make PDS coverage universal in the State at least till the Covid-19 situation improves.