Sangram was in his early twenties when he had a bullet piercing his abdomen while multiple others scraped past causing bleeding injuries.

BHUBANESWAR: AS India adds a new chapter in its history with Prime Minister Narendra Modi performing the bhoomi pujan for construction of a grand Ram Mandir in Ayodhya on Wednesday, Sangram Keshari Mohapatra, in far away Cuttack, just cannot hide his joy. The movement for which he had shed his blood has come to fruition.

“I was confident that the temple of Shri Ram would be constructed some day. But, to see your dream come true, to experience the feeling of fulfilment - it is overwhelming”, said Mohapatra. He is one of the two kar sevaks from Odisha, who sustained bullet injuries during the Ram Mandir movement in Ayodhya on November 2, 1990. Sadhu Panigrahi, a school teacher from Haladi village of Muribahal block in Bolangir district, is the other. 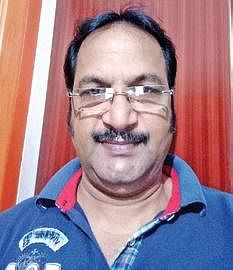 Sangram was in his early twenties when he had a bullet piercing his abdomen while multiple others scraped past causing bleeding injuries. Recalling the day when he among hundreds of kar sevaks were injured and many lost their lives to the indiscriminate firing by police, he says “I was leading a group of students from Ravenshaw College under the guidance of late Swami Laxamananada Swaraswati towards the disputed site when police started lathi charge and lobbed tear gas. As we ran helter-skelter to avoid the gas, the police started spraying bullets. I fell down after the bullet hit my belly. I lost my sense after 10-15 minutes only to wake up in the hospital in Faizabad the next day,” he said.

Twenty days after surgery to remove the bullet, he was discharged from the hospital and allowed to go home. Hailing from a family of RSS swayamsevaks, Sangram (49), the son of former State BJP general secretary Debendra Mohapatra, said they were adequately briefed that police may resort to firing as curfew was imposed around Ayodhya. “But, we were undeterred. We were firm in out resolve to reach Ayodhya after our train was terminated at Mughalsarai by UP administration. We took different routes and whatever mode of transport available to reach the spot which was 216 km away.” ‘We even walked on the rail tracks to avoid notice of the police. The long stretch of sugarcane fields on both sides of the tracks provided a thick cover to escape the heavy security bandobast,” he said.

The group reached Ayodhya a day before the scheduled Kar Seva on November 2. They spent the night in a tent set up for Odisha kar sevaks. “The next morning we moved towards the disputed structure. Surprisingly, the security forces guarding bridge on Saryu river were very cordial and allowed us cross it,” he said.

The group was hardly 400-500 metres away from the structure, when police lathi charged the kar sevaks and fired tear gas. This was followed by indiscriminate firing.“The sacrifice of thousands of kar sevaks and the wish of the people of this nation to see the temple of Ram come up on his birthplace is finally going to be fulfilled. The feeling is indescribable. I am proud to have contributed with blood to make it happen,” he said.

More from Odisha.
Now we are on Telegram too. Follow us for updates
TAGS
Ram Mandhir Ayodhya Kar sevak