Acquired from France, MICA is an all weather missile system available in both short and medium ranges.

BHUBANESWAR: Amid a protracted stand-off along the LAC, the Indian Air Force (IAF) has accomplished a secret mission by conducting several rounds of air-to-air missiles that have recently been acquired from France and Russia from a frontline fighter aircraft off Odisha coast.

The fighter aircraft took off from Kalaikunda airbase in West Bengal and fired the missile, successfully neutralising the aerial target drone mimicking enemy aircraft at low altitude.  “All mission parameters have been met as the target was destroyed validating the missile’s launch envelope. The missile will equip both Sukhoi and Rafale fighter jets,” a defence official told ‘The Express’.

Acquired from France, MICA is an all weather missile system available in both short and medium ranges. The fire-and-forget missile can be used both by air platforms as well as ground units and ships.

The 3.1 metre long missile having a diameter of 0.16 m weighs around 112 kg. It can neutralise targets within a range of 500 metre to 60 km. Of its two variants guided by radio frequency (RF) and infrared (IR), MICA-RF has an active radar homing seeker and MICA-IR has an imaging infra-red homing seeker. Both seekers are designed to filter out counter-measures.

Last week, the IAF had conducted two rounds test of R-77 air-to-air missile acquired from Russia. The multi-purpose missile can be used against a range of aircraft, both tactical and strategic and from hovering helicopters to high-speed at different altitudes. The medium-range air-to-air guided missile R-77 is about 3.6 metre in length and 200 mm in diametre. It weighs around 175 kg. It has an operational range of 80 km to 100 km.  Both the missions were conducted by the IAF while the DRDO provided the logistic support. After the successful trial of Dhruvastra last month, the twin missions during the Covid-19 pandemic proved the readiness of the test range.

“The IAF is in the process of upgrading its squadrons. It is also in process of procuring Meteor missile from the European weapon maker MBDA. Rafale will be equipped with MICA and Meteor,” the official added. 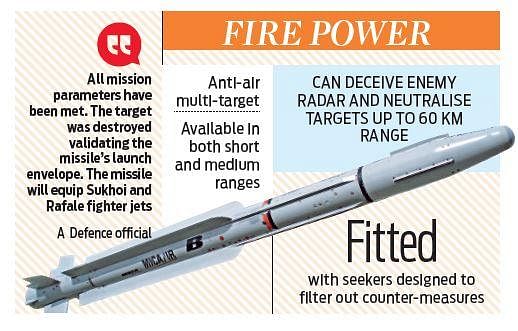 Now we are on Telegram too. Follow us for updates
TAGS
IAF Test Firing Air ti air missilies Rafale