Reasons for the disrupted campaign were many as parents were unable to leave home due to lockdown and reluctant to allow kids for vaccination by health workers in fear of the covid-19 transmission.

BHUBANESWAR: The Covid-19 induced lockdown leading to restrictions on movement had a bearing on the routine immunisation in Odisha as the vaccination coverage was below the target in nearly half of the State.

Of the 314 blocks in the State, sources said, 135 blocks from all 30 districts had less than 85 per cent (pc) coverage with some of the blocks failing to reach the coverage of 80 pc.

The State Government had set the target to cover 90 pc of children and pregnant women this year against last year’s 86 pc.

While pregnant women and infants are being administered three and nine vaccines respectively, children aged between 16 months and 16 years take six vaccines at different stages. Vaccines included polio, BCG, diphtheria, pertussis, tetanus and hepatitis B besides, rotavirus and measles and rubella. As many as 1.2 crore children and six lakh pregnant women are immunised.

The reasons for the disrupted campaign were many as parents were unable to leave home due to lockdown and reluctant to allow kids for vaccination by health workers in fear of the coronavirus transmission. Lack of adequate number of vaccinators also hampered the vaccination process as the health workers were either engaged in Covid-19 management or unable to attend sessions without protective gear.

The vaccine sessions were also stopped for more than a month during April and May in villages and urban areas where Covid-19 positive cases were detected. Delay in transportation of vaccines added to the woes.
Though health experts justified the suspension of mass vaccination campaign for some weeks due to the risk of transmission, they suggested the Government to vaccinate the uncovered children and pregnant women on a priority basis. “Routine vaccination for children is the key public health strategy against many diseases. Disruption in immunisation affects the strategies putting the life of children at risk,” pointed out senior paediatrician Dr CR Panda.

The WHO had also raised concern about the disruption in routine immunisation stating that it may unwind the decades of progress against vaccine-preventable diseases.

Additional Chief Secretary of Health department PK Mohapatra said the districts have already started a special drive to achieve the routine vaccination target. “Recently we had a meeting with the officials of all districts and they have been asked to complete it by end of February. The progress is being monitored every week,” he added. 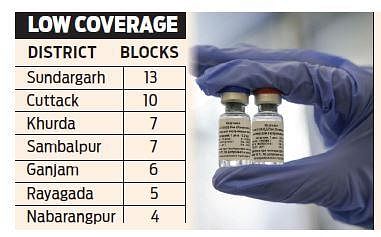 Now we are on Telegram too. Follow us for updates
TAGS
COVID 19 Odisha Odisha immunization